The superstar French economist tortures the data to fit his narrative

Thomas Piketty, the “rock star” French economist who dominated the news in late 2014, is trying to backpedal on the claims that made him famous. While he sticks with his core arguments about the nature of inequality, his new article in the American Economic Review has been widely interpreted as a tempering of the bolder claims in his bestselling Capital in the Twenty-First Century about the causes and consequences of economic inequality.

This is an interesting tack for Piketty. It appears to concede a level of nuance that is often missing from his book, which frequently slips into sweeping narratives of history, oversimplified theoretical assumptions, and aggressive political prescriptions premised on their acceptance.

The centerpiece of Piketty’s inequality argument is a sweeping historical narrative of the 20th century, ostensibly rooted in data. Piketty contends that wealth inequality peaked during the Gilded Age conditions of the turn of the 20th century. This was the original version of the capital-hoarding rentier society that is predicted by his theory, in which the returns on capital are said to outpace the rate of economic growth, or the famous r > g formulation.

According to Piketty, the catastrophic destruction of World Wars I and II, as well as the economic disruption of the Great Depression, took direct and heavy tolls on the world’s capital stock. In doing so, these events destroyed part of the wealth-accumulating mechanisms that Piketty pinpoints as the source of inequality in the belle époque. The result was a stabilizing period during which the wealth distribution for most of the developed world converged at a much lower level of inequality from roughly the 1950s through the 1970s.

At this point, taxes become a central part of Piketty’s story — specifically, the rise of high progressive income and estate taxes during the Depression era. Piketty believes that these tax regimes succeeded in impeding the reconstitution of the capital stock after the Depression and two wars. As a result, the theorized “rentier” pattern did not resume.

This all changed, according to Piketty, around 1980, when a series of tax reforms tied to Ronald Reagan in the United States and Margaret Thatcher in Britain disassembled the mid-century progressive tax regimes. Inequality, he contends, has been on the rise ever since. Piketty calls the resulting pattern a U-shape as it purports to show the resumption of inequality after a war, depression, and tax-induced stabilization period in the mid-20th century.

But a closer look at the underlying inequality data reveals a serious problem in Piketty’s narrative. While his own graphs and charts display the U-shape he predicts, these depictions are the product of substantial data massage.

How Piketty creates an inequality divergence in the United States

Piketty’s most widely discussed “demonstration” of his inequality narrative occurs in his book’s figure 10.5, a historical depiction of wealth inequality in the United States. The U-shape may be readily seen in this graph, where inequality bottoms out in the 1970s before it resumes an upward trend into the present.

The clear trend in this particular graph has made it one of the most widely cited empirical examples from the book, leading Paul Krugman to denounce Piketty’s critics as “inequality deniers.” It is also notable because it purports to show a clear turn in the 1970s, fitting closely with Piketty’s historical narrative of pinning a claimed rise in inequality on the Reagan-era tax cuts. 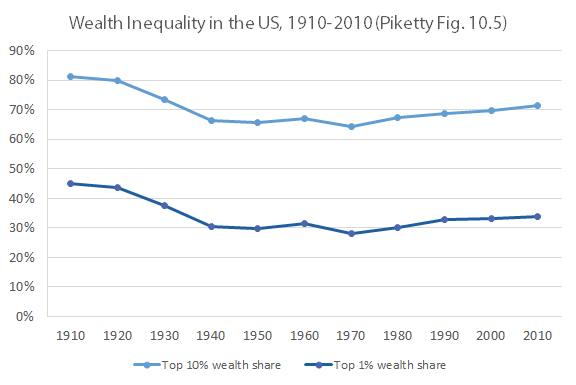 Now compare Piketty’s figure 10.5 to the following graph from a 2004 study by economist Wojciech Kopczuk and Piketty’s frequent collaborator Emmanuel Saez. This widely cited study estimates US wealth inequality from estate-tax data since 1916. Contrary to the rebounding U-shape of Piketty’s graph from the 1980s to the present, this graph portrays wealth inequality as virtually flat from the 1980s until its last return in the early 2000s. Indeed, an extension of this series by Saez shows that 2004 — the last year with available data — was the most equally distributed point in American history to date, with the top 1 percent holding an all-time low of 18 percent of the wealth. 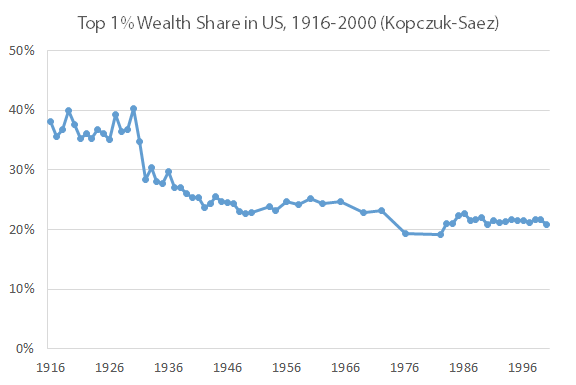 The two different trends are particularly telling, as Piketty’s figure 10.5 is actually based in part on the Kopczuk and Saez series. The divergence occurs because Piketty’s graph is a Frankenstein-esque assemblage of bits and pieces of different studies, cherry-picked to tell the story Piketty expects to find.

When the Kopczuk and Saez trend line flattened out in the 1980s, Piketty simply swapped in a number of other studies based on the Federal Reserve’s Survey of Consumer Finances (SCF). The resulting chart is thus a complete contrivance.

Piketty essentially manufactured the upswing of the U-shape by hand selecting his numbers from disparate sources to create the illusion of a 1970s trough (using Kopczuk and Saez) followed by a rebound from the 1980s to the present (using selectively chosen SCF figures). A simple breakdown of his sources reveals no fewer than five such swaps between different data sources to produce the desired result, as the following graph shows. 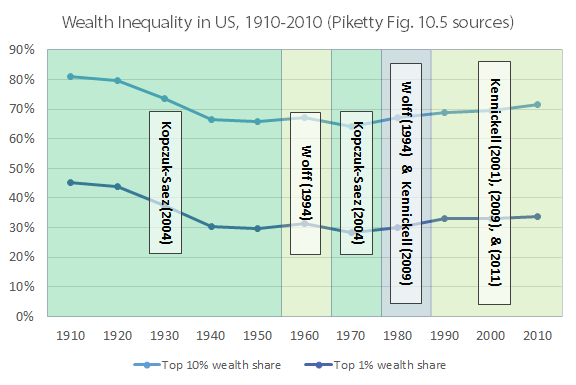 While blending and adjustment techniques are sometimes necessary to plug gaps in large data sets, Piketty’s decisions here defy his own stated methodologies elsewhere. When Chris Giles of the Financial Times raised the possibility of using survey data in place of estate-tax records as a way of estimating inequality in the United Kingdom, Piketty lashed out:

What is troubling about the FT methodological choices is that they use the estimates based upon estate tax statistics for the older decades (until the 1980s), and then they shift to the survey based estimates for the more recent period. This is problematic because we know that in every country wealth surveys tend to underestimate top wealth shares as compared to estimates based upon administrative fiscal data.

When it comes to the US data, Piketty apparently has no issue with making the very same swap so long as it is convenient for his narrative.

To test the validity of my critique of Piketty’s chart, I recently reconstructed his figure 10.5 from the sources cited in his data files using the same adjustment techniques that he employed to reconcile the different estimation methods. I was able to do so, yet by simply cherry-picking different numbers for the same decades out of the exact same SCF and estate-tax estimates that Piketty employed, I was also able to completely reverse the shape and direction of Piketty’s hypothesized U-shape, as the following graph shows. 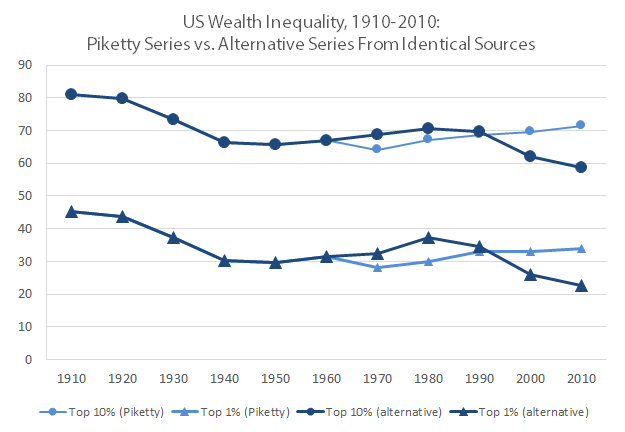 Piketty’s international narrative is likewise the product of data massaging and statistical contrivance.

Piketty’s empirical work suffers from several highly problematic characteristics. Empirical demonstrations of the century-long distributional U-shape for three different countries — his main piece of evidence for his inequality thesis — are rendered unreliable by issues including

Taken together, these issues reflect a severe confirmation bias at play throughout Piketty’s analysis.

Put another way, he seems to construct most of his data presentations around a specific historical narrative that he has already embraced as correct. This is an inversion of scientific inquiry, placing the cart of an ideological conclusion before the data horse and — in some cases — selectively ignoring or omitting data points that diverge from that conclusion.

In short, Piketty’s empirical demonstrations of his U-shaped historical pattern suffer from distortions, biases, methodological inconsistencies, and other questionable data decisions that render them unsuitable for drawing interpretive conclusions about his theory or making prescriptive policy recommendations.

While theoretical critiques of Piketty’s argument abound and, in a welcome turn, he appears to be considering some of them, the data problems at the core of his book remain largely unaddressed. Because Piketty’s argument is largely historical, this continued oversight represents not only his failure to prove his original case, but also a growing divergence between his theoretical model and any semblance of empirical validation.