No, There Isn't Going to Be a Global Coffee Shortage

Prices, how do they work?

Did you hear about the imminent global coffee shortage? How about that looming whiskey supply crisis? It's a classic clickbait formula:

For instance, on Thursday, the Huffington Post breathlessly reported, "If the world doesn't find a way to produce more coffee, and fast, it's very possible that we could see a shortage."

Actually, no, it's not. But why do people think there will be?

Andrea Illy, the chairman and CEO of Illycafe SpA, a Trieste, Italy-based coffee roaster, told Bloomberg last week that global production will have to ramp up by 40 to 50 million bags in the next decade to keep up with consumption.

Global warming also threatens crops, as do low prices that discourage farmers. “Sooner or later, in months or years, we’ll have to make a bold decision about what to do,” he said. "We don't know where this coffee will come from."

Consumption will go up by a third to 200 million bags by 2030, Michael R. Neumann, chairman of the board of trustees at a foundation that's associated with German-based coffee merchant Neumann Kaffee Gruppe, told Bloomberg.

This is a pretty common example of folk economics in the popular press: If demand goes up a lot, we'll run out! Empty shelves! Closed Starbucks! People drinking tea! The horror!

Indeed, running out of coffee (or whiskey) would be horrible. But remember that a shortage means that the quantity consumers demand outstrips the quantity supplied, resulting in many people who want to buy something but can't get it.

In a free market, prices change to match the quantity supplied with quantity demanded. Even if supply and demand change a lot, prices also change to keep everything in balance.

Economist Alex Tabarrok likes to say that a price is "a signal wrapped in an incentive." First, prices signal underlying facts about the world. For instance, let's say that a lot more people want to buy coffee, and the climate is also making it harder to grow. Markets signal this to buyers and sellers through rising prices.

Second, those prices create incentives for people to change their behavior to align with that reality. Higher prices encourage people to conserve. If the price of coffee goes up, you might drink less of it, or you might buy beans and brew it at home, instead of going to Starbucks every day. If what you really like about coffee is the caffeine, you might drink less but buy roasts with higher caffeine content. If you were truly desperate, you might even try substituting tea for coffee.

Higher prices also encourage producers to make more coffee. (Bizarrely, HuffPo frets that "low prices are discouraging farmers" in the middle of an article complaining that demand is going up faster than supply. This seems rather like a person with their eyes shut stumbling around a brightly lit room looking for the light switch.)

Coffee growers might simply plant more, or they might invest in better irrigation, or develop hardier or higher-yield strains, or create more efficient harvesting and storage techniques.

In other words, if demand increases relative to supply, higher prices encourage consumers to drink less and producers to make more, bringing the amount demanded and supplied back into harmony.

Voila. No shortage. Coffee stays on the shelves, there for the buying.

Don't take my word for it: read the alarmist HuffPo article. Do you remember the Great Coffee Shortage of 2014? Empty shelves, bankrupt coffee shops, wailing in the streets? No?

Much of the increase in demand comes from developing countries like China, India and Brazil, the latter of which produces most of the world's coffee, according to the Washington Post.

So Brazil makes most of the world's coffee and had a massive drought. According to the media's folk economic theory, that should have caused a massive global coffee shortage.

But it didn't. Why not? Because of the second half of that sentence:

... leading prices to jump by more than 50 percent.

Supply shrank, demand grew, and we didn't have a shortage — thanks to the miracle of the price system, coordinating the behavior of millions of coffee growers, investors, wholesalers, retailers, entrepreneurs, and drinkers around the globe.

Not only are we not facing a shortage, thanks to prices, but coffee is actually more abundant than ever. World coffee production has roughly doubled since 1961. 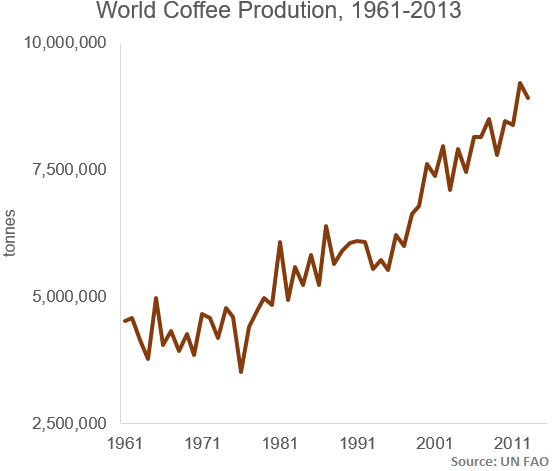 And if there's a looming coffee shortage, investors (that is, people who put their money where their mouth is) don't know about it. Coffee futures prices are near a 10-year low. 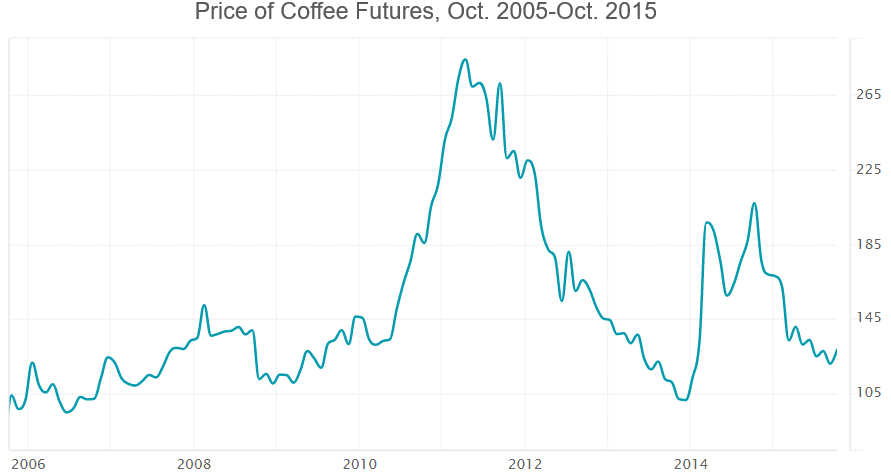 Climate change is supposed to be destroying our ability to produce coffee. But once again, the data don't match up. Average yields per hectare of coffee have increased by 90 percent in the last 50 years, while global temperatures have steadily risen. 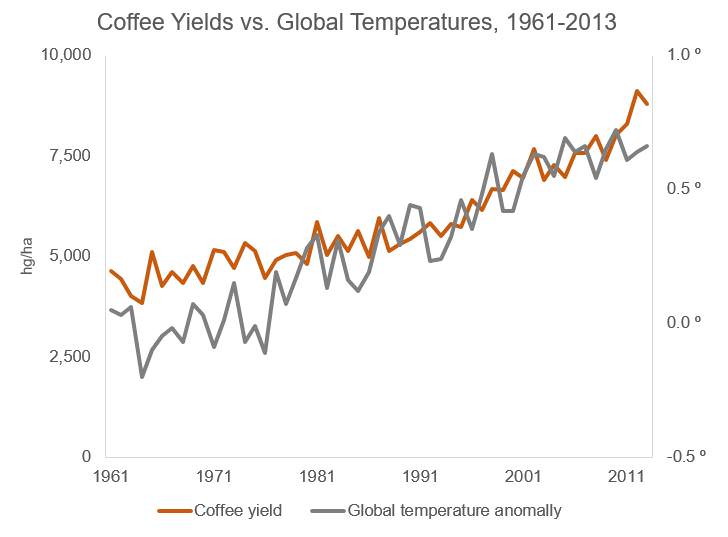 Don't expect any of this good news to slow down the doom-mongers. HuffPo concludes from the (entirely mythical) coffee shortage that massive shortages for all kinds of things are just around the corner: "Lovers of peanut butter, craft beer, fresh fish and bananas may also have to go without as global warming progresses. Time to develop a taste for local vegetables and rice?"

No thanks. I'll stick with my international diet and free trade coffee.