The new analysis notes that higher tax rates are the wrong way to address fiscal shortfalls.

A couple of weeks ago, I used a story about a local tax issue in Washington, DC, to make an important point about how new tax increases cause more damage than previous tax increases because “deadweight losses” increase geometrically rather than arithmetically.

Simply stated, if a tax of X does Y amount of damage, then a tax of 2X will do a lot more damage than 2Y.

This is the core economic reason why even left-leaning international bureaucracies agree that class warfare taxes are so destructive. When you take a high tax rate and make it even higher, the damage grows exponentially.

As such, I was very interested to see a new study on this topic from the World Bank. It starts by noting that higher tax rates are the wrong way to address fiscal shortfalls:

…studies have used the narrative approach for individual or multi-country analyses (in all cases, focusing solely on industrial economies, and mostly on industrial European countries). These studies find large negative tax multipliers, ranging between 2 and 5. This recent consensus pointing to large negative tax multipliers, especially in industrial European countries, naturally entails important policy prescriptions. For example, as part of a more comprehensive series of papers focusing on spending and tax multipliers, Alesina, Favero, and Giavazzi (2015) point that policies based upon spending cuts are much less costly in terms of short run output losses than tax based adjustments.

The four authors used data on value-added taxes to investigate whether higher tax rates did more damage or less damage in developing nations:

A natural question is whether large negative tax multipliers are a robust empirical regularity… In order to answer this highly relevant academic and policy question, one would ideally need to conduct a study using a more global sample including industrial and, particularly, developing countries. …This paper takes on this challenge by focusing on 51 countries (21 industrial and 30 developing) for the period 1970-2014. …we focus our efforts on building a new series for quarterly standard value-added tax rates (henceforth VAT rates). …We identify a total of 96 VAT rate changes in 35 countries (18 industrial and 17 developing).

The economists found that VAT increases did the most damage in developing nations:

…when splitting the sample into industrial European economies and the rest of countries, we find tax multipliers of 3:6 and 1:2, respectively. While the tax multiplier in industrial European economies is quite negative and statistically significant (in line with recent studies), it is about 3 times smaller (in absolute value) and borderline statistically significant for the rest of countries.

Here’s a chart showing the comparison:

Now here’s the part that merits close attention. The study confirms that the deadweight loss of VAT hikes is higher in developed nations because the initial tax burden is higher:

Based on different types of macroeconomic models (which in turn rely on different mechanisms), the output effect of tax changes is expected to be small at low initial levels of taxation but exponentially larger when initial tax levels are high. Therefore, the distortions and disincentives imposed by taxation on economic activity are directly, and non-linearly, related to the level of tax rates. By the same token, for a given level of initial tax rates, larger tax rate changes have larger tax multipliers. …In line with theoretical distortionary and disincentive-based arguments, we find, using our novel worldwide narrative, that the effect of tax changes on output is indeed highly non-linear. Our empirical findings show that the tax multiplier is essentially zero under relatively low/moderate initial tax rate levels and more negative as the initial tax rate and the size of the change in the tax rate increase. …This evidence strongly supports distortionary and disincentive-based arguments regarding a nonlinear effect of tax rate changes on economic activity…the economy will inevitably suffer when taxes are increased at higher initial tax rate levels.

What makes these findings especially powerful is that value-added taxes are less destructive than income taxes on a per-dollar-raised basis.

So if taking a high VAT rate and making it even higher causes a disproportionate amount of economic damage, then imagine how destructive it is to increase top income tax rates.

P.S. The fact that a VAT is less destructive than an income tax is definitely not an argument for enacting a VAT. That would be akin to arguing that it would be fun to break your wrist because that wouldn’t hurt as much as the broken leg you already have.

I’ve even dealt with people who actually argue that a VAT isn’t economically destructive because it imposes the same tax on current consumption and future consumption. I agree with them that it is a good idea to avoid double taxation of saving and investment, but that doesn’t change the fact that a VAT increases the wedge between pre-tax income and post-tax consumption.

And that means less incentive to earn income in the first place.

This is confirmed by the study:

Panels A and B in Figure 18 show the relationship between the VAT rate and the perceived effect of taxes on incentives to work and invest, respectively, for a sample of 123 countries for the year 2014. Supporting our previous findings, the relationship is highly non-linear. While the perceived effect of taxes on the incentives to work and invest barely changes as VAT rates increase at low/moderate levels (approximately until the VAT rate reaches 14 percent), it falls rapidly for high levels of VAT rates.

Here’s the relevant chart from the report: 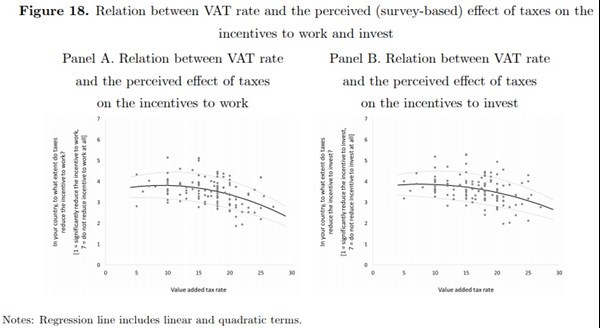 The moral of the story is that all tax increases are misguided, but class warfare taxes wreak the most economic havoc.

P.S. Not everyone understands this common sense observation. For instance, the bureaucrats at the Congressional Budget Office basically argued back in 2010 that a 100 percent tax rate was the way to maximize growth.