Should the survival of humanity hinge on bureaucratic protocols? 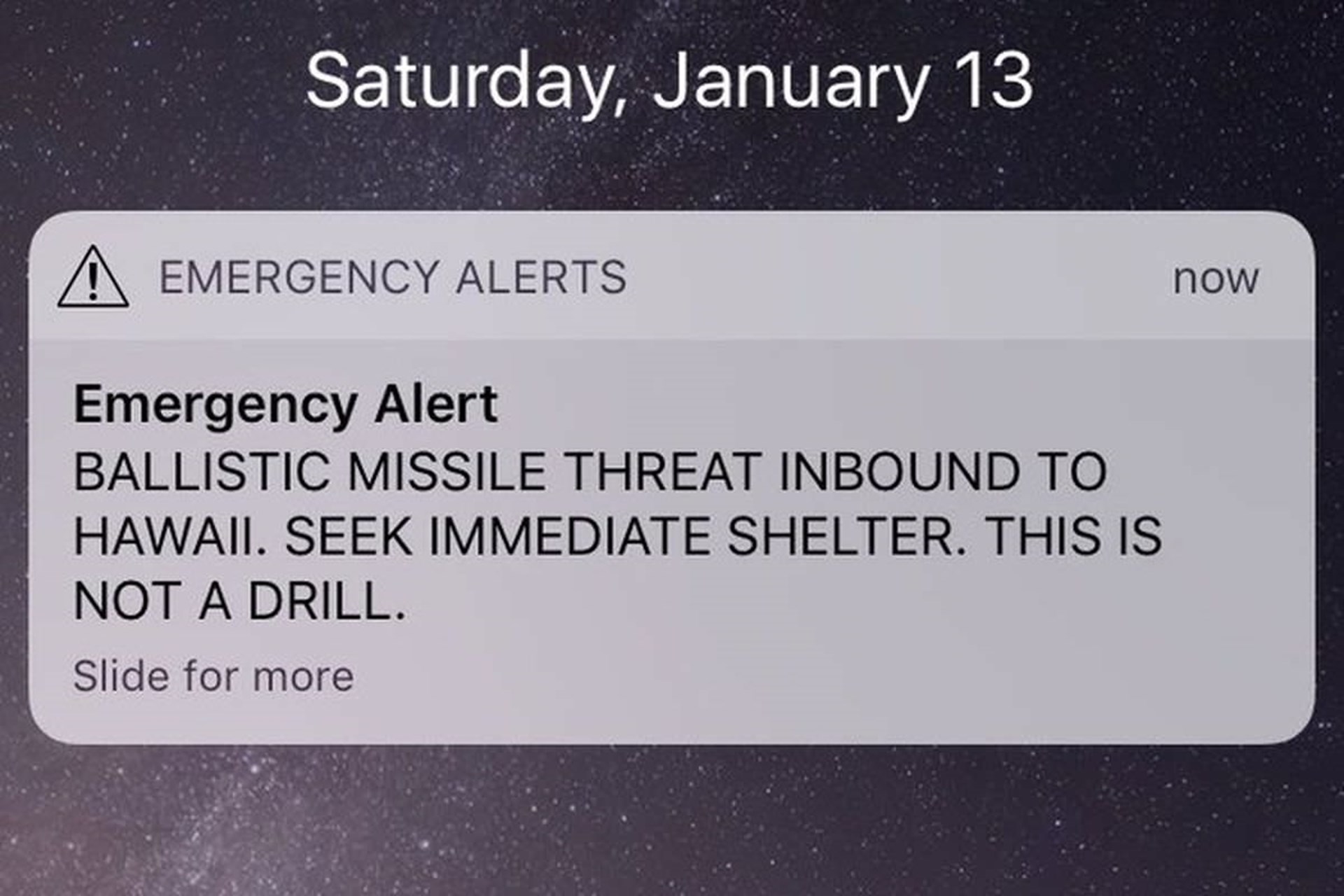 On Saturday at 8:05 am, residents of Hawaii were terrified by a text message that said a missile was heading their way, and they should “seek shelter immediately.” Helpfully, the message also said, “this is not a drill.” And it wasn’t – it was merely a stomach-clenching error.

A notable thing about Saturday’s mistake is how human it was.

Ten minutes after it was sent, it was canceled, and updates were broadcast over social media saying so. However, it wasn’t until 8:45 that a follow-up text saying it had been a mistake was sent out. In the meantime, according to The New York Times and other reports, more than a few families huddled completely terrified, assuming that they were about to die – or at least that there was nothing to be done about it if they were.

Hawaii, which is 2,400 miles from California and 4,600 miles from North Korea, is a lot closer to a potentially hot sequel to the Cold War than the rest of us and is understandably tenser, even without this kind of morning. Last year, they started monthly bomb drills thanks to the ongoing battle between President Trump and Kim Jong-Un.

The error was the fault of a still unnamed employee of Hawaii’s state version of FEMA – The Hawaii Emergency Management Agency. According to the BBC:

“State Governor David Ige apologised and said it was caused by an employee pressing the wrong button.”

And though this might end up a valuable push towards fixing a rickety system that managed to incorrectly inform people that they should duck and cover, but not officially say “hang on, not really” for more than half an hour, it is a truly unforgivable error. Now, two employees will have to okay any subsequent warnings, which certainly sounds like something that should have already been the case now.

The Cold War had many such scrapes.

Though much of the classic fiction about nuclear war – including the 1964 satire Dr. Strangelove – deals with a fear of automated nuclear war destroying humanity, or at least the system itself being unstoppable once a human “pushes the button,” a notable thing about Saturday’s mistake is how human it was. (Reportedly the employee in question had to do multiple confirmations of sending the message.) But it did demonstrate the power of one person to cause mass suffering through what might have been the longest half hour of countless Hawaiians’ lives.

The Cold War had many such scrapes, most notably during the Cuban Missile Crisis, but also in the 1980s when tensions returned to critical levels between the US and the USSR. In both cases, Soviet individuals were the ones brave and human enough to not use the weapons at their disposal. A sub didn’t fire their nuclear-tipped torpedo during the US’ blockade of Cuba thanks only to the vote of Vasili Arkhipov, who was second-in-command on a sub that required all three senior officers to agree to fire the weapon.

In 1983, a man named Stanislav Petrov took the time to gamble on a report of five incoming US missiles being a mistake. It was. Both of those men have been referred to as having saved the world – arguably hyperbolic, but not as much as we’d like.

Ellsberg relates the nauseating details in his recent book The Doomsday Machine, an important tome that’s as optimistic as it sounds.

A terrifyingly mechanical system has more than once depended on human beings who were unwilling to take that final step into nuclear war. Humans who, in fact, have risked national safety and even world safety on not being the person to say fire. But though men like Arkhipov and Petrov are a credit to us all, the more you learn about nuclear policy during the duck-and-cover days, the more amazing it feels that mankind has stuck around.

Famed whistleblower Daniel Ellsberg, 86, is best known for the Pentagon Papers leak. However, at the time, he also snatched thousands of documents on nuclear policy, because everything he had learned about it during his career as a civilian with tremendous access screamed that the public needed to know. Ellsberg relates the nauseating details in his recent book The Doomsday Machine, an important tome that’s as optimistic as it sounds. It’s vital reading that reminds people that both poor planning – such as the US under Dwight Eisenhower having no contingency in place for only bombing the USSR into dust, but it being a package deal with China, something that confirmed the rigidity of these planners as well as their blithely democidal tendencies – and the potential for simple mistakes still run rampant in US nuclear policy.

Ellsberg noted in an interview with Reason that if it happened, a “nuclear holocaust will be one of the most carefully prepared for events in human history.” He focuses on the Cold War, but there are still 15,000 nuclear weapons in the world, with around 10,000 of them military-ready, and nuclear powers are still butting heads as if the survival of humans isn’t what’s being gambled on.

This Hawaii mistake might, for good and for ill, encourage the federal government to put a contingency plan in place about how best to respond to a real attack – or one that appears real. It is haunting that that might involve firing back at an offending country, or even doing so before the threat is confirmed.

Officially – as far as any of us know – only the president has that power, in one of the neat tricks of American politics that says Congress makes war, but firing a nuclear weapon doesn’t count. In reality, Ellsberg makes the case that the presidential aide carrying the nuclear football is “theater.” We don’t know who can make the choice to fire a missile back, or who might make that choice in the most terrible moment, or what other errors run rampant in these warning systems.

Lucy Steigerwald is a contributing editor to Antiwar.com and a contributor to Playboy.