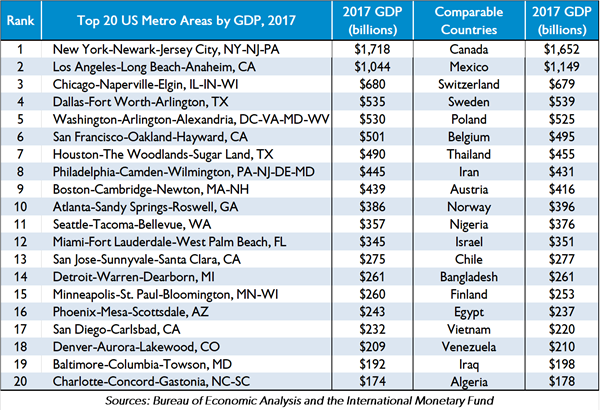 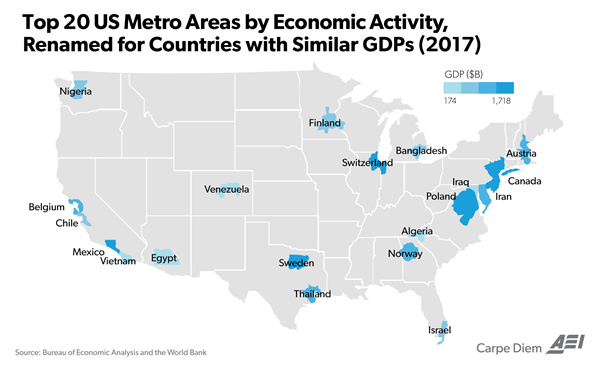 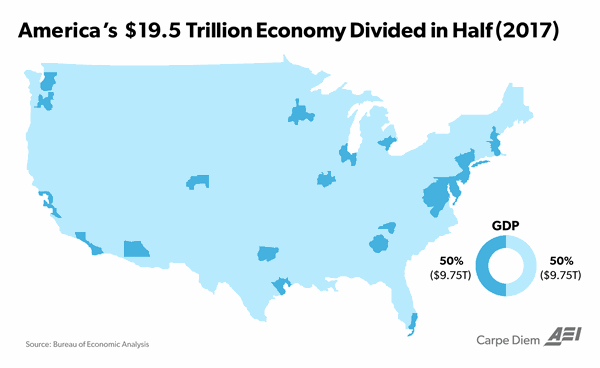 The table and first map above help to put America’s ridiculously large $19.5 trillion economy (Gross Domestic Product in 2017) into perspective by comparing America’s 20 largest metro area economies in 2017 (based on data recently released by the Bureau of Economic Analysis) to the economies of entire countries with similar Gross Domestic Products in 2017 (International Monetary Fund data here via Wikipedia). Here are some interesting facts about the size of US metro area economies:

MP: This comparison provides another demonstration of how ridiculously large America’s $19.5 trillion economy really is by showing that the economies of America’s largest metropolitan areas are equivalent in economic size to the GDP of entire large countries (see my recent comparison on CD of the economic size of US states to entire countries with comparable GDP). It’s mind-boggling to think that the economy of the New York City metro area is larger than Canada’s economy with a labor force that is half the size, and the economy of the LA area is almost as large as the entire Mexican economy with a labor force that is 88 percent smaller. Moreover, each of America’s 17 largest metro economies as separate nations is big enough to rank in the world’s 50 largest economies, and all 20 US metro areas in the table above would rank in the world’s 56 largest economies. Perhaps it’s a demonstration of Larry Kudlow’s mantra that “free market capitalism is the best path to prosperity” because it was largely free markets, free trade, and capitalism that propelled the US from a minor British colony in the 1700s into a global economic superpower and the world’s largest economy with dozens of metro areas that produce economic output equivalent to the GDP of some of the world’s largest countries.

Special thanks to Kevin Kiefer for his assistance collecting and organizing the data for this post.