It's one of those surreal headlines you'd swear is from The Onion: 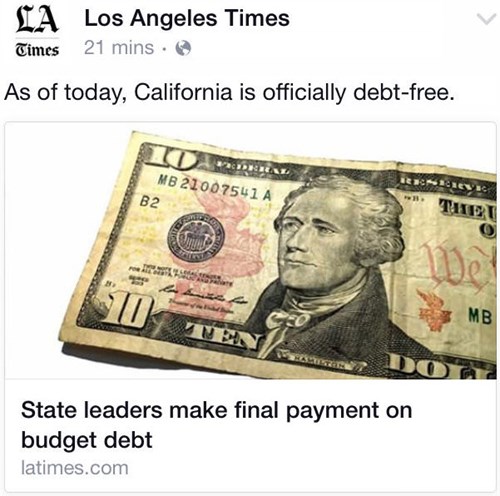 This is unbelievably, laughably untrue. California's state debt stands at about $777 billion, the highest in the country, dwarfing runner-up New York ($387 billion). According to State Budget Solutions, Sacramento has racked up close to $130 billion in outstanding debt, and it faces nearly $650 billion in unfunded liabilities for public employee pensions and other retirement benefits.

It's possible that this actually understates California's long-term fiscal problems.

A study by the California Policy Center in 2013 found that conservative estimates of total government debt — including city, county, and public school district debt — totaled nearly $850 billion. More realistic assumptions about future health care costs and the annual rate of return on the pension fund (4.5% instead of 5.5%) put the total debt over $1 trillion.

Sacramento's aversion to cutting spending, meeting its obligations, and cancelling stupid projects are among the reasons why California has the lowest the credit rating of any state except Illinois, and why it's been rated 49th or 50th in credit-worthiness for well over a decade.

So what the heck is the LA Times talking about? Well, the state finally managed to pay off the debt from one year's deficit from over a decade ago, when voters approved $14 billion in borrowing to cover 2004's shortfall. The state ultimately accumulated $5 billion in interest and fees on it.

But now California is officially debt-free... from its 2004 budget deficit. Hurray! Just a trillion dollars to go, give or take.