Kelo: How Politicians Stole Her Home and Gave It to Pfizer (Who Destroyed It for Nothing) 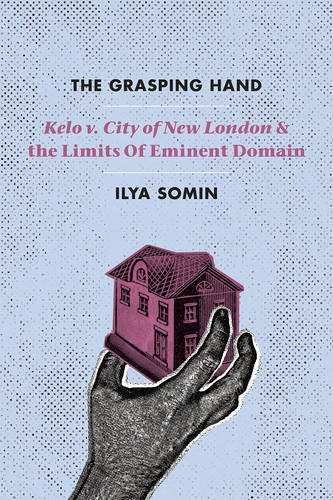 Most of my new book, The Grasping Hand, focuses on the broader legal and political issues raised by the Supreme Court’s ruling in Kelo v. City of New London.

As explained in the first post in this series, I wrote the book primarily to address these big-picture issues.

But the story of how such a momentous case arose from unlikely origins is interesting in its own right.

The case originated with a development project in the Fort Trumbull area of New London, a small city in Connecticut. The neighborhood had fallen on difficult economic times in the 1990s after the closure of a naval research facility.

City officials and others hoped to revitalize it. The administration of Republican Governor John Rowland hoped to expand his political base by promoting development in New London; but to avoid having to work directly through the heavily Democratic city government, they helped resuscitate the long-moribund New London Development Corporation, a private nonprofit organization established to aid the city with development planning.

The NLDC produced a development plan that would revitalize Fort Trumbull by building housing, office space, and other facilities that would support a new headquarters that Pfizer, Inc. – a major pharmaceutical firm – had agreed to build nearby.

The development plan produced by the NLDC was in large part based on Pfizer’s requirements, which NLDC leaders (some of whom had close ties to Pfizer) were eager to meet. Pfizer would not be the new owner of the redeveloped land, but did expect to benefit from it.

I believe that NLDC leaders genuinely thought the plan would serve the public interest, as did the city and state officials who supported it. But it is also true, as one of those who worked on the plan put it, that Pfizer was the “10,000-pound gorilla” behind the project.

In order to implement the plan, the NLDC sought to acquire land belonging to some ninety different Fort Trumbull property owners.

In 2000, the New London city council authorized the NLDC to use eminent domain to condemn the land of those who refused to sell. Some defenders of the takings emphasize that all but seven of the owners sold “voluntarily.”

But as New London’s counsel Wesley Horton noted in oral argument before the Supreme Court, many did so because there was “always in the background the possibility of being able to condemn… that obviously facilitates a lot of voluntary sales.”

Moreover, owners who were reluctant to sell were subjected to considerable harassment, such as late night phone calls, dumping of waste on their property, and locking out tenants during cold winter weather.

Seven individuals and families, who between them owned fifteen residential properties, refused to sell despite the pressure. One was Susette Kelo, who wanted to hold on to her “little pink house” near the waterfront.

Some of the other families involved had deep roots in the community and did not want to be forced out. Wilhelmina Dery, who was in her eighties, had lived in the same house her whole life, and wished to continue living there during the time left to her.

The Cristofaro family were also strongly attached to their property, which they had purchased in the 1970s after their previous home had been condemned as part of an urban renewal project. The resisting property owners tried to use the political process to prevent the takings. They managed to attract the support of a wide range of people in the community, including many on the political left who believed that it was wrong to forcibly expel people from their homes in order to promote commercial development.

But the Coalition to Save Fort Trumbull organized by the resisters and their allies had little, if any, hope of prevailing against the vastly more powerful forces arrayed against them.

The owners also tried to hire lawyers to fight the taking in court. But the lawyers they approached told them that there was little chance of success, and that – in any event – they could not afford the necessary prolonged legal battle.

The owners would almost certainly have had to capitulate, if not for the intervention of the Institute for Justice, a libertarian public interest law firm. IJ had long been interested in promoting stronger judicial enforcement of “public use” limitations on takings, and one of the members of the Coalition reached out for help.

As IJ lawyer Scott Bullock put it, the Fort Trumbull situation was an “ideal public interest case” for the Institute. Legally, the case was a good one because the city did not claim that the property in question was “blighted” or otherwise causing harm, thereby making it harder to prove that condemnation would genuinely benefit the public.

The case also featured sympathetic plaintiffs who were determined to fight for their rights. That made it likely that it would play well in the court of public opinion, and that it would not be settled before it could lead to a precedent-setting decision.

IJ hoped to achieve a ruling holding that takings that transfer property from one private individual to another for “economic development” do not serve a genuine “public use” and are therefore unconstitutional.

Thanks to IJ’s pro bono legal representation, the case went to trial. In 2002, a Connecticut trial court invalidated the condemnation of 11 of the 15 properties because the city and the NLDC did not have a clear enough plan of what they intended to do with the land.

Both sides appealed to the Connecticut Supreme Court, which upheld all fifteen takings in a close 4-3 decision. The majority ruled that almost any public benefit counts as a “public use” under the state and federal constitutions, and that courts must generally defer to government planners.

In a dissenting opinion, Justice Peter Zarella argued that “the constitutionality of condemnations undertaken for the purpose of private economic development depends not only on the professed goals of the development plan, but also on the prospect of their achievement.”

Presciently, he warned, “The record contains scant evidence to suggest that the predicted public benefit will be realized with any reasonable certainty,” and that it was “impossible to determine whether future development of the area… will even benefit the public at all.”

At this point, most legal commentators (myself included) believed that the case was almost certainly over. Few thought that the federal Supreme Court was going to take a public use case.

Supreme Court precedent dating back to 1954 held that virtually any possible public benefit counts as a public use, and the Court had unanimously reaffirmed that view in 1984. Most experts thought that the debate over the meaning of “public use” had been definitively settled.

But Scott Bullock and Dana Berliner – the IJ lawyers who represented the property owners – thought the conventional wisdom was wrong. And they were vindicated when the Supreme Court unexpectedly agreed to take the case. At that point, much new national media attention was focused on the New London condemnations.

Property law experts were well aware that longstanding Supreme Court precedent permitted the government to take property for almost any reason. But very few members of the general public knew that. Many ordinary Americans were shocked to learn a city could condemn homes and small businesses in order to promote private development – a reality they were unaware of until the publicity surrounding Kelo drove it home to them.

The Supreme Court upheld the takings in a 5-4 ruling. But the resulting controversy created a major political backlash and shattered the seeming consensus in favor of a broad approach to public use.

As for the City of New London, Justice Zarella and other skeptics turned out to be right. The NLDC’s flawed development plan fell through, as did a number of later efforts. Richard Palmer, one of the state supreme court justices who voted with the majority, later apologized to Susette Kelo, telling her he “would have voted differently” had he known what would happen. In the meantime, feral cats have been using the property. So far, at least, they have been the main local beneficiaries of the takings. (I should point out that the events in New London leading up to the Supreme Court case are the subject of an excellent earlier book by journalist Jeff Benedict. My book primarily focuses on the broader legal and policy issues raised by the Kelo case, which Benedict touched on only briefly. But I also cover the origins of the case in Chapter 1, and post-decision developments in New London in the conclusion.)

You can buy The Grasping Hand on Amazon here.