It's Time to Privatize Our Stockpile of Crude Oil

The market is the best system for storing reserves and easing supply shocks.

The Trump Administration is reportedly considering plans to sell off about half of the Strategic Petroleum Reserve (SPR), which is the federal government’s nearly-700 million barrel stockpile of crude oil. Such a move would help ease the budget crunch (bringing in about $17 billion at current oil prices) but would also (partially) return the function of resource allocation back towards the private sector. If the government leaves prices alone, the market is the best mechanism for storing reserves and easing supply shocks.

What’s the Purpose of the SPR?

The SPR was formed in 1975 amidst the scares over the OPEC embargo and perceived “energy shortage.” As part of its membership in the International Energy Agency (IEA), the US committed to maintain a 90-day stockpile of net petroleum imports. [1]

There is no reason the government should be in charge of emergency stockpiles of oil.The idea of the SPR is straightforward enough: The federal government will maintain a “strategic” reserve of crude, so that Americans will not be as vulnerable to a major disruption in the world oil market.

However, just as we don’t ask the federal government to build cars or grow food, there is also no theoretical reason that it should be in charge of emergency stockpiles of oil. Nicolas Loris had a thorough analysis on privatizing the SPR back in 2015, but in this post I’ll hit the main points.

Here is the Energy Information Administration’s breakdown of US petroleum stocks as of May 26, 2017 (the latest available at this writing): 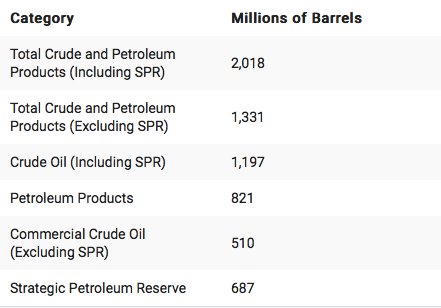 As the table indicates, if we include the government’s SPR of crude oil, the private sector’s holdings of both crude oil and refined petroleum products (such as gasoline), at the end of May the country held the equivalent of 2 billion barrels worth in inventory.

Futures markets provide “signals” about what “the market” thinks about the future supply for various commodities. ​

Thus we can see that at this very moment, the private sector in the US is carrying crude oil inventories that are 74 percent of the SPR, while the inventories of already-refined petroleum products are the barrel-equivalent of 120 percent of the SPR. It is simply not the case that the government-held SPR is the only defense against a sudden supply disruption. Indeed, the existence of the SPR reduces the incentive of the private sector to accumulate oil inventory.

Furthermore, if the government were to get out of the SPR business altogether, the market has built-in mechanisms to anticipate supply disruptions and to prepare accordingly. Specifically, futures markets and other derivatives allow investors to put their money on the line, in order to provide “signals” to the world about what “the market” thinks about the future supply/demand balance for various commodities.

For example, suppose that now in June tensions flare between the Western governments and Iran, so that investors begin worrying that oil exports from the Middle East may be interrupted in the near future. This would lead speculators to bid up the price on oil futures contracts and related assets.

History suggest markets are much better at allocating resources.As the gap widened between today’s spot price of crude, and the price for delivery of a barrel of crude in (say) December, it would become more and more profitable for people in the oil industry to buy crude today at the spot price, physically store it in a warehouse, and simultaneously sell (“go short”) futures contracts on crude for December delivery.

So long as the foreign policy situation worsened, speculators would continue to drive the gap between the spot and futures price, and the EIA would tally up a rising stockpile of private crude oil inventories. The market would be physically stockpiling and carrying crude oil forward in time, from a period of relative abundance to (possible) relative scarcity, just as we would want and just as a benevolent and omniscient central planner would do.

The advantage of leaving such activity to the private sector, however, is that both theory and history suggest markets are much better at allocating resources – guided by profits and losses – than government officials.

We should note that an important assumption in our argument above was that the government lets “greedy speculators” earn “windfall profits” from their investments. If instead, the government were to swoop in and place an extraordinary tax on investors, or were to otherwise suppress the market increase in oil prices following a supply disruption, then people in the private sector would have less incentive to correctly anticipate future market conditions and to adjust their crude inventories accordingly.

The market with freely floating prices is a much more effective mechanism than relying on a few government officials.When it comes to the oil sector (as in others), additional government interventions only cause unintended consequences. Using the threat of SPR withdrawals to limit “price gouging” and “profiteering” only cripples the ability of the market to anticipate and mitigate supply disruptions.

There are many political and strategic considerations behind the Strategic Petroleum Reserve. However, on the narrow technical issue of maintaining an adequate buffer against possible import disruptions, the market economy with freely floating prices is a much more effective mechanism than relying on a few government officials.

In closing, we should also note the distinction between a mere liquidation of (a large portion of) the barrels of crude held in the SPR, versus total privatization in the sense of turning over ownership of the underground storage caverns to private hands. By getting out of the oil inventory game altogether, the federal government would no longer be able to “jawbone” prices.

Currently the government can move prices with its “club in the closet” of SPR stockpiles that it can draw down and sell into the market, without the concern of profitability that private inventory holders face. Therefore, in addition to raising money and making oil allocation more efficient, outright privatization of the SPR would mark a philosophical shift in the federal government’s role in energy markets.

[1] Based on 2015 import rates (which are comparable to the most recent data), the Department of Energy (DOE) estimates that the SPR currently has 149 days’ worth of net petroleum imports. (Technically, that figure is based on the total capacity of the SPR sites. With their current inventory, the SPR has about 143 days’ worth of net petroleum imports, using the same 2015 figure.) If the Trump Administration were to sell off half of the SPR, that would push the SPR’s level of protection below the IEA’s 90-day requirement. However, if government and private inventories can be used to satisfy the IEA requirement (which is the case, according to the DOE’s’s FAQon the SPR), then the US will still be well within compliance.

Reprinted from Institute for Energy Research.