Is the World Becoming Less Free?

Erosion of the rule of law and various civil liberties are causing the world to be a less free, less prosperous place.

The Cato Institute has, in cooperation with the Canadian Fraser Institute and the German “Friedrich-Naumann Stiftung für die Freiheit,” assembled a comprehensive 396-page report on human freedom in the world. Overall, governments worldwide have reduced the level of freedom in recent years.

The Link between Individual Liberty and Prosperity

Freedom of movement, expression, and information, as well as the rule of law, have seen the largest decreases since 2008. Since 2008, the global Human Freedom Index (HFI) has gone down to 6.93/10 from 7.05/10. According to Ian Vasquez and Tanja Porčnik, who drafted the report, important factors for the score were performances in the categories regarding individual and civil liberties, as well as economic liberty. When it comes to the latter, the researchers point out that the individual liberty is very much linked to economic prosperity: the freest countries show a higher GDP per capita ratio compared to those with very low levels of individual freedom. Hong Kong, which ranks second in Cato’s Human Freedom Index, is a noticeable exception on this point.

In total, twelve major categories determined the overall freedom score of a country. The Cato Institute found that particularly in the area of freedom of movement, expression, and information, as well as the rule of law, have seen the largest decreases since 2008. "In many parts of the world, freedom is under assault, with nationalism, populism, and hybrid forms of authoritarianism being sold as viable alternatives. As such, the largest deteriorations in freedom have occurred in Syria, Egypt, Venezuela, Belize, and Greece," says Tanja Porčnik.

However, the report concludes that what benefits human freedom worldwide is the fact that a large number of countries rooted the idea of freedom inside their societies. This alludes to the fact that for many countries, a certain line of illiberalism, as it stands today, cannot be reached. In this area, the report (p.12) refers to states such as Canada and the United States, which hold constitutional constraints such as separation and decentralization.

The changes are obviously only minor developments in comparison to the bottom of the list, where we see very concerning developments when it comes to human freedom. At the bottom of the list, we see Libya, Venezuela, and Syria. While Libya and Syria have seen a sharp decrease because of the absence of the rule of law as well as authoritarian governments and war, Venezuela shows a structural decrease in its ranking because of its denial of economic liberty. Here we see that “individual liberty leads to prosperity” works both ways. Socialism in Venezuela and the resulting decrease in economic liberty has reduced human freedom quite significantly. Here is Venezuela’s ranking over time: 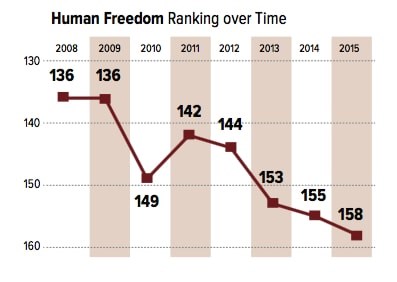 The Fight for Liberty Continues

A takeaway from this report, particularly for the pro-liberty movement, is that Margaret Thatcher’s famous quote, “There is no liberty without economic liberty,” remains as true in the 21st century as it was in the 20th century. Economic prosperity and individual liberty are intertwined, and one cannot be ignored at the expense of the other. If we want to make a positive change for people’s freedoms, we need to give them the rule of law and the right of free enterprise. There cannot be human progress unless personal liberty and economic liberty go hand in hand.

We shouldn’t accept a tax cut at the expense of civil liberties, and we will not be able to take personal liberty for granted if we do not oppose the government tampering with economic freedom. That, in its essence, is the challenge of our lifetime.