Is the Financial Crisis Really Over?

Sadly, the "firming recovery" is just a myth.

The major economies of the world keep expanding. According to official statistics, output is increasing, unemployment rates are declining, while stock and house prices edge higher. Investor risk aversion, which rose to very high levels in the period of financial market turmoil, has come down considerably, lending a boost to credit transactions and pushing asset prices upwards. It seems that the economic and financial crisis of 2008/2009 has finally been overcome.

However, there is reason to keep interpreting these developments with a healthy dose of skepticism, don’t get carried away by all the talk about a ‘firming recovery'. The pickup of economic activity is not as ‘healthy’ as it seems: It has been brought about by an unprecedentedly loose monetary policy. Central banks have brought interest rates to extremely low levels and bailed out struggling borrowers by running the electronic printing presses. 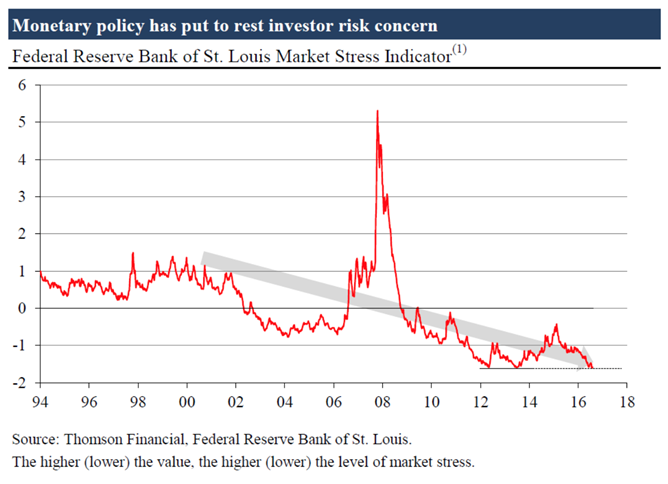 By no means less important, central banks have provided financial markets with a ‘safety net': They have signaled to financial market agents – implicitly or explicitly – that they would come to their rescue, fending off recession and financial market crashes. This has contributed to declining risk premia. For instance, lenders have become less concerned about potential borrower defaults and issue loans at very low-interest rates.

It was the central banks' monetary policy that caused the latest crisis in the first place.

What is more, in stock markets future cash flows are discounted at artificially low-interest rates. This, in turn, increases firms’ present values and thus their stock prices and valuation levels. As firms’ cost of capital decline, new investments are brought on the way – investments that would not have been undertaken had there not been an artificial lowering of interest rates and risk premia caused by monetary policies.

Mainstream economists consider the current situation to be a ‘natural recovery': Monetary policies, they say, have ‘stimulated' the economies, having brought them back into growth territory. Most importantly, central banks have prevented recession-depression, which, so the narrative goes, would otherwise have fallen upon us. The visible improvement in economic activity and rising asset prices is referred to as evidence that the monetary policy has been successful.

Sowing the Seeds of the Next Crisis

Looking through the lens of the Austrian School of Economics, however, a rather different picture emerges. ‘Austrians’ would argue that it was the central banks' monetary policy that caused the latest crisis in the first place. Artificially suppressed interest rates and money created out of thin air through bank credit expansion rendered a credit ‘boom' of massive proportions. However, this boom turned out to be unsustainable, and it inevitably turned into a ‘bust.’

Firms embarked upon investment projects which would not have been made had interest rates not been manipulated downwards.

It was central banks' easy money policies that lured firms and consumers into false spending decisions. Firms embarked upon investment projects, which would not have been made had interest rates not been manipulated downwards. Consumers ran into debt, living beyond their means. The effects of bad investments (‘malinvestment'), combined with those from overstretched financial positions, made for a perfect storm.

However, central banks did not allow the bust to do its work – namely cleaning the slate. In fact, they did more of the same. By pushing down interest rates even further and issuing even more money created out of thin air, they prevented unsound firms and banks from going out of business. The unfolding bust was turned back into yet another boom – which is now widely hailed as central banks having successfully defeated the forces of crisis.

Unfortunately, the truth is that monetary policies keep sowing the seeds of the next crisis. The current period of economic expansion – with its output gains and job creation – brings forth another round of malinvestment, which sooner or later will become evident. This is not a question of if but a question of when according to the Austrian Business Cycle Theory.

Indeed, the Fed raised its main interest rate in December 2015 from an all-time low of 0.0 – 0.25 percent to 1.0 – 1.25 in June 2017. And it has also started reducing liquidity in the US banking system. This, however, does not mean that the Fed will put an end to the notorious boom-and-bust-cycle. 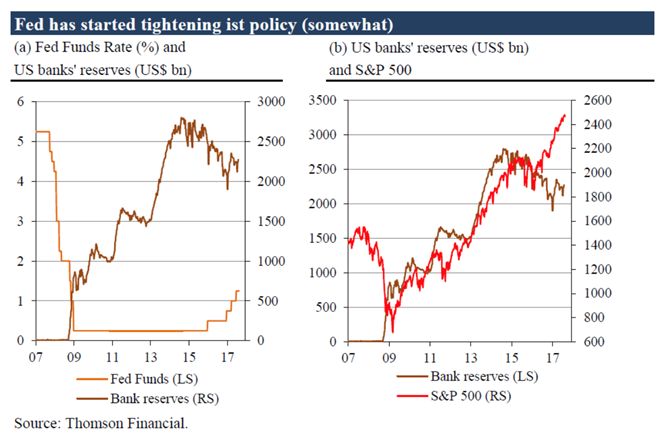 On the contrary. By raising interest rates further, the Fed will unmask many investments as ‘flops', and it will push quite a few borrowers over the cliff. In fact, the idea of a policy of ‘normalizing interest rates’ would have to accept a (substantial) slowdown in economic activity, if not a full-blown recession with all its accompanying social and political consequences. Would the Fed have the guts to pursue this road? Would people accept it?

Presumably not: People enjoy and applaud the boom, and they hate the bust and, naturally, they want to escape it. Against this backdrop, it seems to be practically impossible for the Fed to bring interest rates back to a level which prevents any further malinvestments, or false spending decisions in general. As soon as the economic and financial structure – built up by heavily suppressed interest rates – starts to falter, the Fed is likely to turn back to monetary expansion.

Central Banks Will Make It Worse

From this viewpoint, an escape from the boom and bust cycle is not in the cards. The more quickly the Fed brings interest rates up, the more quickly the current ‘recovery' can be expected to turn into a bust. And the longer the Fed keeps interest rates at suppressed levels, the greater the malinvestments and the more severe the market's subsequent adjustment process will be – resulting in output and job losses.

The disturbing truth is that central bank policies have put the economies on the road to inflation.

Central banks – the Fed as well as its peers in other countries – will most likely keep interest rates at a relatively low level. Any interest rate increases can be expected to remain limited and of a temporary nature. That said, the disturbing truth is that central bank policies have put the economies on the road to inflation: Issuing ever greater amounts of unbacked money in an attempt to overcome the consequences of having issued unbacked money in the first place.

Warning against inflation admittedly seems to be misplaced when consumer and producer price inflation are fairly low by historical standards and the Fed is (and possibly, with a time lag, some other major central banks are as well) about to raise interest rates. However, there is good reason for the investor to consider any central bank attempts to raise rates to be limited and temporary.

To be on the safe side: Monetary policies are already inflationary. Not only consumer prices keep rising over time. In recent years in particular asset prices – the prices of, say, stocks, bonds, housing, and art – have been going up substantially, thereby debasing the purchasing power of money.

If anything, central banks will make matters worse, as their ‘road to inflation' policies can be expected, if anything, to gain momentum in what lies ahead.