Seeing someone doing better for themselves than you are motivates self-improvement and innovation.

And, to be fair to the departed president, income inequality within countries has been increasing in recent decades. Some reasons for that increase, such as corrupt dealings between politicians and crony capitalists, are deplorable and should be stopped.

Others are unavoidable. Increasingly, for example, highly intelligent men and women fall in love in college or grad school. Their households are richer and their children more fortunate. That leads to greater income and social stratification that, being voluntarily entered into, should not be interfered with by the state. Income inequality on a national level, in other words, is here to stay.

The same is less true of international inequality, which is declining. Humanity is some 300,000 years old, and while it is true that the material circumstances of our distant ancestors were much more equal than is the case today, almost everyone lived in extreme poverty.

Life among sedentary hunter-gatherers was unequal. They “developed hereditary nobility who kept slaves … [and] hoarded luxuries”.

The wealth accumulation among nomadic hunter-gatherers, explains Steven Pinker in his book Enlightenment Now: The Case for Science, Humanism and Progress, was circumscribed by the weight and volume of the physical possessions that they could carry on their backs. Life among sedentary hunter-gatherers was more unequal. They “developed hereditary nobility who kept slaves … [and] hoarded luxuries.”

Social stratification accelerated following the agricultural revolution some 12,000 years ago. As more people settled down, city-states and, later, empires emerged. These early polities developed ruling classes (nobles, priests, bureaucrats, etc.) who tended to be much better off than the rest of the population. That said, even the richest and most powerful people of the past could not begin to imagine of the riches and conveniences enjoyed by ordinary people today.

The Handmaiden of Progress

Inequality, explains the Princeton University economist Angus Deaton in his book The Great Escape: Health, Wealth, and the Origins of Inequality, is the handmaiden of progress. It is only when some people become better off that a higher standard of living becomes imaginable and, consequently, achievable.

In recent decades, however, global inequality started to decline. That did not happen due to declining incomes in rich countries.

That is precisely what happened during the Industrial Revolution when a pronounced income gap started to emerge between the countries of Western Europe and North America on the one hand and the rest of the world on the other. In 1775, for example, US gross domestic product per person stood at $1,883. In 2016, it stood at $53,015—a 27 fold increase in the real standard of living (figures are in 2011 U.S. dollars).

The economic divergence between the West and the Rest, which took off during the 19th century, continued well into the 20th century. In recent decades, however, global inequality started to decline. That did not happen due to declining incomes in rich countries. Most of those have recovered from the Great Recession and are at an all-time high.

Rather, it happened due to quicker growth in non-Western countries, who have benefited from internal economic reforms, including the end of central planning as well as the globalization of trade, services, and financial flows.

Gini, I Got Your Number

The most commonly used indicator of income inequality is the Gini coefficient, which measures income inequality on a scale from zero (i.e., all incomes are equal) to 1 (i.e., one person has all the income). One way to measure global income inequality, explains Branko Milanovic from City University of New York, is to calculate a population-adjusted average of Gini values for all individual countries.

As the graph below illustrates, the decline in global income inequality started in the 1980s and is coterminous with a period of greater economic freedom and interconnectedness known as “globalization.” 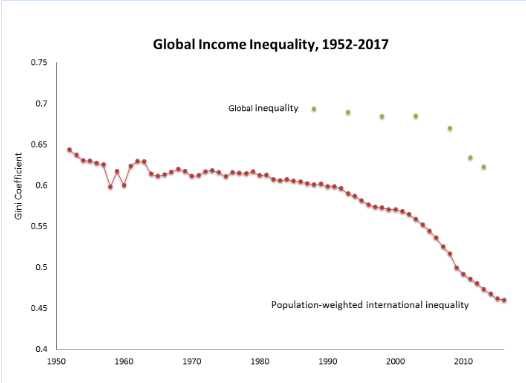 This measure of income inequality—let’s call it inequality between countries—is somewhat misleading, however, for it assumes that everyone within any given country earns the same income.

Still, both measures of global income inequality show a downward trend. As such, concludes Milanovic, “We are witnessing the first decline in global inequality between world citizens since the Industrial Revolution.”

Some might feel that a decline in global income inequality is a good thing in and of itself. Others, myself included, would rather celebrate better schooling, health care, sanitation, and nutrition that globalization and rapid economic growth in developing countries have made possible.

This article is reprinted with permission from CapX.