When you see a headline that begins with “Florida man…,” you know it’s more likely to be about some guy trying to take down a tornado with his Colt Python than it is that a resident of the Sunshine State has cracked cold fusion. In public policy circles, the words “California policymakers…” appearing in a headline are attaining a similar status.

The latest ill-conceived policy from California is a statewide rent cap. As the New York Times reported this week:

The bill limits annual rent increases to 5 percent after inflation and offers new barriers to eviction, providing a bit of housing security in a state with the nation’s highest housing prices and a swelling homeless population.

The Consensus Is Overwhelmingly against Rent Controls

Economists are a famously fractious bunch. Fiscal policy or monetary policy? Stimulus or austerity? Such debates play out among the profession with a level of bitterness that amazes the layman.

So it is always worth paying attention when you get something like consensus. But that is pretty much what we have on the issue of rent control. In 2012, economists were polled with the following question:

Local ordinances that limit rent increases for some rental housing units, such as in New York and San Francisco, have had a positive impact over the past three decades on the amount and quality of broadly affordable rental housing in cities that have used them.

Eighty-one percent of them disagreed. In 2000, Paul Krugman wrote:

The analysis of rent control is among the best-understood issues in all of economics, and — among economists, anyway — one of the least controversial. In 1992 a poll of the American Economic Association found 93 percent of its members agreeing that ''a ceiling on rents reduces the quality and quantity of housing.''

If consensus is how you do your science, rent control is a dead duck.

Rent Controls Solve the Symptom, Not the Problem

Why are economists so overwhelmingly against rent controls? One reason is that they mistake the symptom for the problem.

Look again at the Times quote. It identifies two problems: “the nation’s highest housing prices and a swelling homeless population.”

Regarding the first, we must ask ourselves why prices are high. They are high because the demand for housing in California is high relative to the supply of it. And why is that? As I wrote in February:

The bizarre story of Bob Tillman’s five-year, $1.4 million legal battle to turn his coin-operated laundromat into an apartment building shows how regulations constraining supply coupled with rising demand have driven house prices ever higher. Again, when politicians in the Golden State complain about the lack of affordable housing, they themselves are in large part responsible for that lack in the first place.

Regarding the second problem, the “swelling homeless population,” rent control will do nothing whatsoever for these folks. The problem, remember, is too many people wanting to live in a given stock of housing. Capping the price of that housing by government decree will do nothing to solve that problem. What would help is getting rid of the government regulations that restrict the supply of housing.

Prices are not problems; they are signals of problems. Trying to solve the problem by treating the signal is like trying to slow down your car by fiddling with the speedometer.

Economic theory is pretty clear about what the effects of a price ceiling will be. As Figure 1 shows, at equilibrium rents are $600, and 300 units of housing are both supplied and demanded. If you cap the rent at $400, however, you decrease the number of homes supplied to 200 and increase the number of homes demanded to 400. You now have an excess of demand over supply of 200 (demand of 400 minus supply of 200). If you were motivated by a concern for a shortage of housing, congratulations, you just made it worse. It wasn’t intended, but it was a consequence. 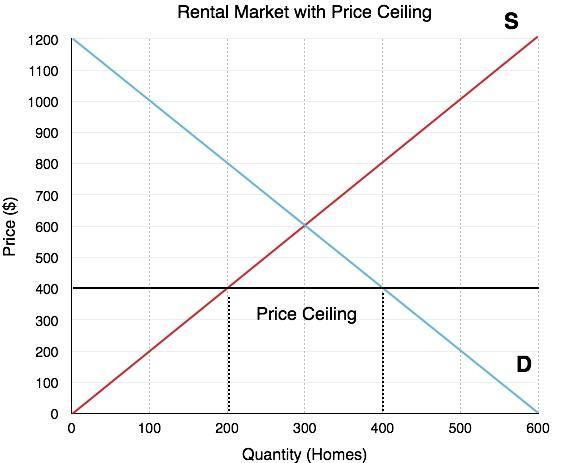 This might sound a little wacky. How can the supply of housing fall? Landlords don’t demolish their houses in response to a fall in rents, so shouldn’t the demand curve be vertical? In this case, a reduction in rents would see no consequent fall in the number of homes available.

But, wacky as it might sound, the supply of housing is responsive to price changes⁠—it is “price elastic,” in the jargon. An old but excellent and still sadly relevant book titled Verdict on Rent Control examines episodes from a number of countries and finds:

[I]n every country examined, the introduction and continuance of rent control/restriction/regulation has done much more harm than good in rental housing markets—let alone the economy at large—by perpetuating shortages, encouraging immobility, swamping consumer preferences, fostering dilapidation of housing stocks and eroding production incentives, distorting land-use patterns and the allocation of scarce resources—and all in the name of the distributive justice it has manifestly failed to achieve.

[L]andlords of properties impacted by the law change respond over the long term by substituting to other types of real estate, in particular by converting to condos and redeveloping buildings so as to exempt them from rent control. This substitution toward owner occupied and high-end new construction rental housing likely fueled the gentrification of San Francisco, as these types of properties cater to higher income individuals. Indeed, the combination of more gentrification and helping rent controlled tenants remain in San Francisco has led to a higher level of income inequality in the city overall.

Again, it wasn’t intended, but it was a consequence.