How the Minimum Wage Promotes Ageism

In addition to the Seattle study, another minimum wage paper crossed my path this week and it takes a very different approach than much of the literature. In Denmark, the minimum wage jumps up by 40% when a worker turns 18. Thus the authors, Kreiner, Reck and Skov, ask what happens to the employment of young people when they hit their 18th birthday? Answer: employment drops dramatically, by one-third.

A picture tells the story. On the left is measured wages by age, the jump up due to the minimum wage law is evident at age 18. On the right is the employment rate–the jump down at age 18 is also evident as is a bit of pre-loss as workers approach their 18th birthday. 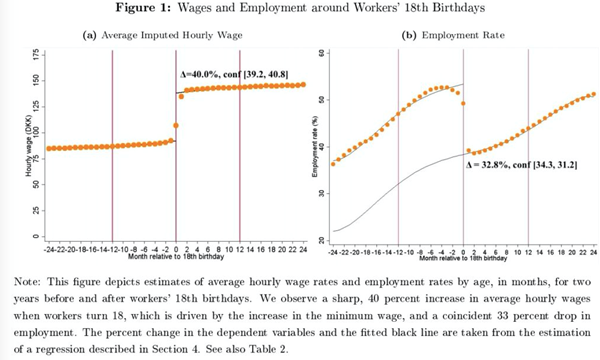 The authors have administrative data covering wages, employment and hours worked for the entire workforce of Denmark so their estimates are precise.

Denmark has laws making age discrimination illegal but these do not apply when a young person turns 18 and firms may legally search for under or over-18 age workers.

A variety of restrictions means that under-18 age workers can do less than adults (e.g. they can’t legally lift more than 25 kilos or have a driver’s license.) Thus, productivity increases at age 18, making the employment loss at this age even more dramatic.

The authors can’t tell for certain if workers are quitting or getting fired but there are few other obvious discontinuities around exactly age 18. Students are eligible for certain benefits at age 18 but the authors are able to look at sub-samples where this objection doesn’t apply and the results are robust.

In a section of the paper that adds important new evidence to the debate, the authors look at the consequence of losing a job at age 18. One year after separation only 40% of the separated workers are employed but 75% of the non-separated workers are employed. Different interpretations of this are possible. The separated workers will tend to be of lower quality than the non-separated and maybe this is correlated with less desire to have a job. Without discounting that story entirely, however, the straightforward explanation seems to me to be the most likely. Namely, the minimum wage knocks low-skill workers off the job ladder and it’s difficult to get back on until their skills improve.