How Dangerous Is It to Be a Cop? (Redux)

The "war on cops" is pure fiction

It’s “war on cops” season again, where politicians and pundits toss around the political football of officer safety. So now might be an opportune time to update my previous posts about the dangers of police work.

The National Law Enforcement Officers Memorial Fund keeps track of all the officers who have died on the job, from any cause, going back to the 19th century.

Here’s an update of my original chart, showing officer fatalities per million residents since 1900. The broad sweep of history shows that police work has been getting a lot safer since Alcohol Prohibition ended (with a temporary reversal during the 1960s and 1970s). 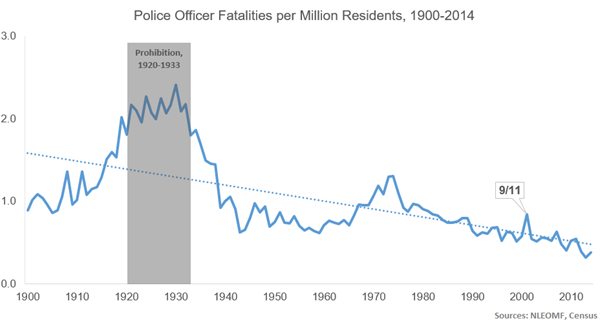 But, of course, not all fatalities are homicides. In fact, in recent years, only about a third of work-related police deaths have been from murder.

NLEOMF doesn’t separately track homicides, but the FBI has its own database for felony killings of police in the last few decades. The Bureau of Justice Statistics has also conducted a national police census every four years since 1992, giving us some reliable estimates for the total number of sworn officers up through 2008.

And no matter how you slice it, police work has been getting a lot safer. Fatalities and murders of police have been falling for decades — per resident, per officer, and even in absolute terms.

NLEOMF doesn’t have the only database of officer deaths, however, and some people prefer the data from the Office Down Memorial Page.

AEI’s Mark Perry has crunched their numbers for firearm-related deaths (a good proxy for homicides), and his findings closely mirror my own.

Again, the data show that 2015 is one of the safest years for American policing in history, both in absolute terms and adjusted for population. (H/t Mark for the data — I just combined his two charts into one.) 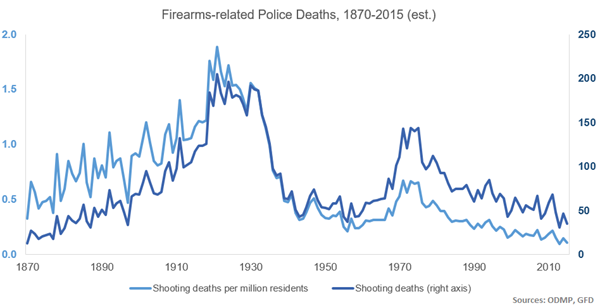 One explanation for these trends is that fatality and homicide rates are only going down because of technology: bulletproof vests and better medical care are saving officers who would have been killed in the past.

But the FBI also collects statistics on the number of police assaulted and injured each year, and they also show dramatic declines in violence against police.

In other words, cops are not just being saved more often — they are also being attacked and injured less frequently. 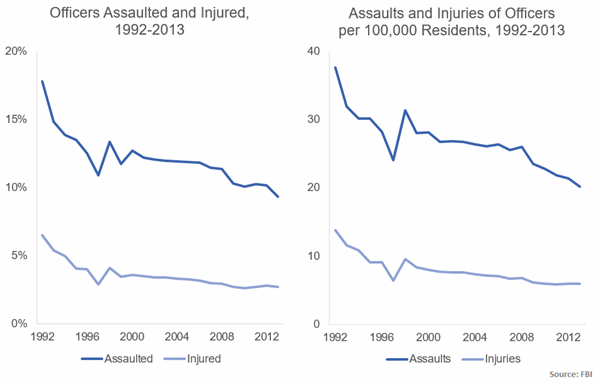 Another way to measure how dangerous it is to be a cop is to compare it to other jobs. So how does police work stack up against other professions?

The Washington Post’s Wonkblog took a look at that using the Bureau of Labor Statistics’ data on fatal work injuries. Unfortunately, the BLS only collects data on “patrol officers,” not all police, but even so, policing isn’t even in the top ten most dangerous professions.

Perhaps even more surprisingly, police aren’t even the most likely occupation to be murdered. Taxi drivers and chauffeurs are more than twice as likely as cops to be murdered on the job.

Another way to look at it is to compare homicide rates from around country to the rate for police. Here the comparison is even more striking: it’s safer to be a cop than it is to simply live in many US cities.

It’s hard to estimate the current murder rate for police, but in 2008 (the last time we had good data on the total number of officers), there were 5.2 murders per 100,000 full-time equivalent sworn officers — below the then national average of 5.4 murders per 100,000. 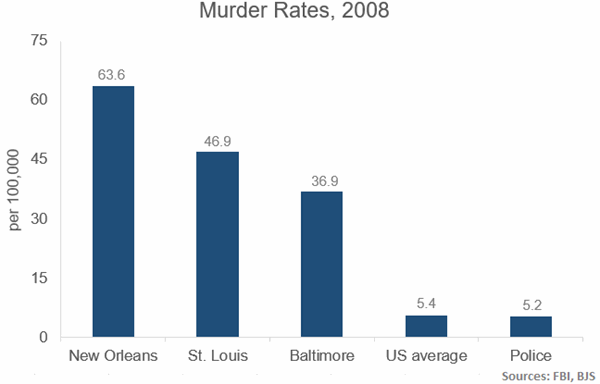 In 2008, you were 12 times more likely to be killed living in New Orleans than wearing a badge. Since then, the number of police has increased, so the rate is almost certainly lower today.

The bottom line is that cops are safer than many workers, safer than residents of many cities, and indeed safer than they’ve been in decades.

There are real liabilities to inflating the threats to police. If you tell cops over and over that they’re in a war, they’re under siege, they’re under attack, and that citizens are the enemy — instead of the people they’re supposed to protect — you’re going to create an atmosphere of fear, tension, and hostility that can only end badly, as it has for so many people.

There is no war on cops. Not now, not last year, not any of the times that ideologues and media hacks have tried to invent one.

Cops need to know this. And so do we.

As I wrote in the Freeman last year, “Disproportionate fears about officer safety are leading inexorably to the disproportionate use of force” — as well as leading many people (especially those who have never witnessed police misconduct) to excuse obvious brutality in the name of officer safety.

Meanwhile, those who see such behavior every day will have their trust in law enforcement steadily eroded.

Almost as bad as the headline stories is this long-run deterioration of relations with the police. More than anything else, cops need the cooperation and support of their communities to catch criminals. When cops start to treat citizens like their enemy, it’s not surprising when the public stops viewing police as their allies.

To be clear, none of this suggests that cops have an easy job. They don’t. Dealing with rowdy, drunk, and sometimes violent people every day is an incredibly hard job, whether or not it’s very likely to kill you. Nor is this to deny or downplay the tragedy of murdered police officers — their families surely deserve our sympathy and our support. Nor am I saying that all cops are bad.

But none of these things — and certainly not a mythical “war on cops” — should stop us from having a hard conversation about law enforcement and criminal justice reform in America.

Exaggerating the dangers of being a cop does no one any good. A clear understanding of the risks officers face will not only help them make better decisions, it will help us make better ones as voters, jurors, and taxpayers.