Knights and their wars get a lot of attention, but the merchant was the real hero of the European Middle Ages. 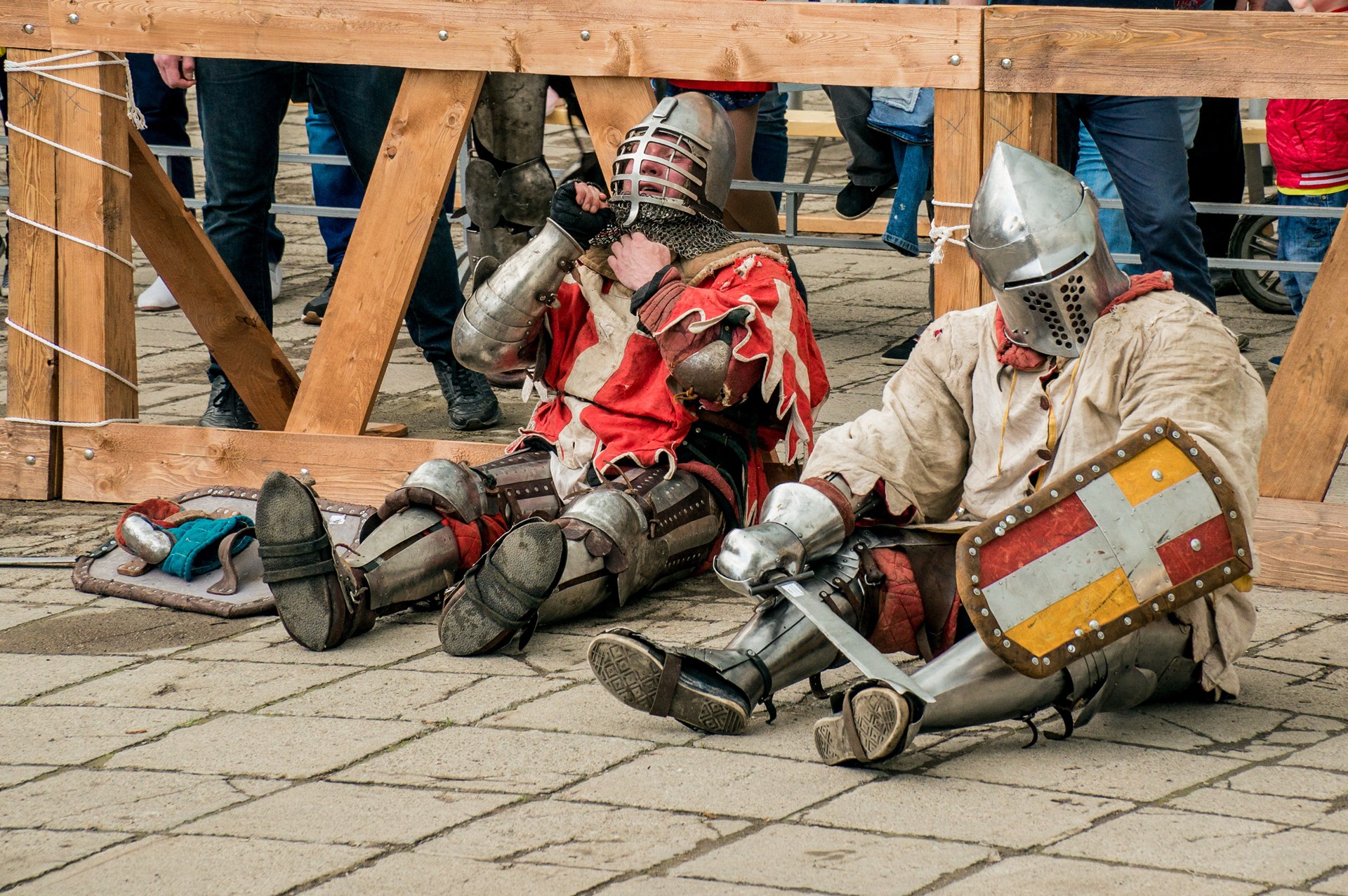 In 1278, the King of England came up with a new plan to raise money and land, as leaders are fond of doing. Certain that historic privileges had been usurped by uppity subjects, King Edward sent royal officers around to prominent individuals demanding by what legal right — quo warranto — they held their honors. However when Edward’s men arrived at the home of one John de Warenne, Earl of Surrey, the ageing aristocrat pulled out his rusty sword and proclaimed: “My ancestors came with William the Bastard, and conquered their lands with the sword, and I will defend them with the sword against anyone wishing to seize them.”

And that was that. In the Middle Ages, social status derived from military strength or, more importantly, the military strength of one’s ancestors. The very European order rested on a caste of knights devoted to violence, one of the reasons why society was so absurdly dangerous, with Oxford’s homicide rate at the time being twice that of modern Baltimore.

Because knights were strong, so knighthood was celebrated in songs and poems, and yet the violent culture that underpinned their position only led to further bloodshed — until the rise of the merchants swept them away. Although a number of things contributed to the huge decline in violence of the late medieval period, among them the Catholic Church and the legal system, the development of capitalism and the rise of a merchant class whose wealth was not won with a sword played a huge part.

The Flemish Flout the French

The medieval system began with the Franks, whose mastery of cavalry made them the most powerful tribe in the former western empire. Later, the Normans used horses in far larger numbers and developed the cavalry charge, used to lethal effect at the Battle of Hastings. Cavalry underpinned the European social order because only those with a reasonable amount of land could afford the destrier warhorse, which cost 30 times as much as a regular farm animal and could carry up to 300lbs in weight, including 50lbs of iron armor — itself very costly.

It was the beginning of the end. No longer could the aristocracy simply push around the bourgeoisie. The sons of the aristocracy were mostly schooled in warfare from a young age and despised learning and trade, which were viewed as dishonorable, leading to an excess of landless younger sons whose only skill was fighting, many of whom found their way to wars, or caused them, or made a living at absurdly dangerous tournaments. Cavalry developed certain rules — chivalry, which primarily concerned the treatment of aristocratic prisoners — as well as an idealization of the aristocratic warrior through the stories of Arthur, Lancelot, and Roland that singers recited at the courts of dukes and counts.

This order was first shaken in 1302 when France’s cavalry confidently marched north to suppress a revolt by the Flemish. Flanders is not naturally rich in resources — Vlaanderen means flooded — but its people had turned swamps into sheep pastures and towns, building a cloth industry that made it the wealthiest part of Europe, its GDP per capita 20 percent greater than France and 25 percent better than England. The wealth of Flanders’ merchants was such that when Queen Joan of France visited, she afterward wrote in horror that: “I thought I would be the only queen there, but I find myself surrounded by 600 other queens.”

The Flemish were traders, not knights, which is why the French were sure of victory. And yet, with enough money to pay for a large, well-drilled infantry, they were able, for the first time, to destroy the cavalry at the Battle of the Golden Spurs. It was the beginning of the end. No longer could the aristocracy simply push around the bourgeoisie, and as the latter grew in strength, it undermined the violence-obsessed culture of the nobility.

European capitalism had begun in northern Italy, chiefly Venice, one of nine Italian cities that had surpassed 50,000 inhabitants by this point. Like Flanders, Venice was at the mercy of the sea, but its isolated and vulnerable geography led to what John Julius Norwich called: “a unique spirit of cohesion and cooperation… not only at times of national crisis but also, and still more impressively, in the day-to-day handling of their affairs.”

Once they began to trade with the Muslims, they lost their hunger for holy war. Venice was high in trust, a vital component for the growth of sophisticated markets, and so was the first to develop joint-stock companies and banks. In 1156, the Republic raised a public loan, the first time since antiquity, and the following year it issued the first banking laws in Europe.

The Venetians, along with their arch-rivals the Genoese and Pisans, had been involved in the crusades, but, despite papal prohibition, had continued to trade with the infidel. Indeed, nothing would stop their desire to engage in commerce, and Arab geographer and traveler Ibn Jubayr noted that “It is amazing to see that the fires of discord burn” between Christians and Muslims when it comes to politics but, when trading, travelers “come and go without interference.” Religious zealots back in Europe observed with frustration that among Westerners settled in the Levant, once they began to trade with the Muslims, they lost their hunger for holy war.

If Venice was the leading capitalist state, then Florence was where a middle-class ethos developed the strongest. Matteo Palmieri, a Florentine philosopher, wrote that only a merchant could have honor. And Gregorio Dati, one of Florence’s international silk traders, went so far as to say, “A Florentine who is not a merchant, who has not traveled through the world, seeing foreign nations and peoples and then returned to Florence with some wealth, is a man who enjoys no esteem whatsoever.” A sort of proto-liberal metropolitan snob.

In Italy, warfare had by the 14th century been contracted out to mercenaries, and even in France, it was noticed that this new merchant lifestyle had its benefits. The 14th-century satire Renart le Contrefait observed that:

Even England Catches On

London was behind Italy or Flanders, but it was catching up. The city had started to grow as a trading hub in the 12th century, and its mayor, William Hardel, was the only commoner to witness the Magna Carta in 1215 and helped secure Clause 41, which stated that all foreign “merchants are to be safe and secure in departing from and coming to England” without “evil exactions.”

The aristocratic ideals it harked back to were mostly a sham and ultimately rested on the rusty sword. London expanded rapidly in the later Middle Ages, increasing its share of England’s wealth from two to nine percent, and Henry IV (1399-1413) was the first king to invite its merchants onto the royal council, among them Sir Richard Whittington (although in contrast, Henry hated another rising profession, lawyers, and banned them from parliament, or the “Unlearned Parliament,” as it was called).

Despite their power, the merchants purposefully avoided conflict so that when, in the 1380s, Richard II tried to raise an army in the city to fight his various internal enemies, he was met with apathy, the citizens replying that they were “simple tradesmen, unversed in the art of war.”

In contrast, among English aristocrats born between 1350 and 1375, one in four died violently, and during the following century, with the War of the Roses, whole families were wiped out. Although merchants played little part in the conflict, they were enthusiastically supportive of the Yorkist Edward IV, the first king to really appreciate the City as a financial hub. He invested himself, and would take leading merchants away for team-bonding sessions, where they played sports, drank themselves into a stupor, and indulged in rather sordid behavior with women (the City’s recent scandals are nothing new). Even Edward’s favorite mistress, Jane Shore, came from the merchant elite, the daughter of a Cheapside mercer and the wife of another.

No account of any trader could ever compete with these knights’ tales, and yet you could argue that they were the real heroes who shaped our world. Yet the nobility still longed for war with France, and in 1475, the king was pushed into leading an army across the channel where he was happily bought off. After an enormous drunken party in which English and French soldiers intermingled, the king was greeted with enthusiasm by the city governors of London, delighted at the prospect of “intercourse of Merchaundises for their Cuntries and Subjects”.

The aristocratic class that wished for glory in battle was in retreat, and yet, despite this, won the narrative. While in exile in Burgundy, King Edward had met a London merchant by the name of William Caxton who in his spare time transcribed books for aristocratic women. Exhausted at the toll of work, he learned through business contacts of a new technology in Germany, called movable type; when Caxton brought a printing press back home one of the most successful books he published was Thomas Malory’s The Death of Arthur.

It became the influential work in celebrating the Heroic Narrative of the Middle Ages, but the aristocratic ideals it harked back to were mostly a sham and ultimately rested on the rusty sword (and Malory was a convicted rapist). No account of any trader or banker could ever compete with these knights’ tales, of course, and yet you could argue that they were the real heroes who shaped our world.

Ed West is the author of England in the Age of Chivalry (and Awful Diseases).