How Africa Got Left Behind

African politicians have paralyzed the continent.

African poverty was not caused by colonialism, capitalism or free trade. As I have noted before, many of Europe’s former dependencies became rich precisely because they maintained many of the colonial institutions and partook in global trade. African poverty preceded the continent’s contact with Europe and persists today. That is an outcome of unfortunate policy choices, most of which were freely chosen by Africa’s leaders after independence.

By 1500, a typical European was about twice as rich as a typical African.

Like Europe, Africa started out desperately poor. The late Professor Angus Maddison of Groningen University has estimated that, at the start of the Common Era, average per capita income in Africa was $470 per year (in 1990 dollars). The global average was roughly equal to that of Africa. Western Europe and North Africa, which were parts of the Roman Empire, were slightly better off ($600). In contrast, North America lagged behind Africa ($400). All in all, the world was both fairly equal and very poor.

The origins of global inequality, which saw Western Europe and, later, North America, power ahead of the rest of the world, can be traced to the rise of the Northern Italian city-states in the 14th century and the Renaissance in the 15th century. By 1500, a typical European was about twice as rich as a typical African. But the real gap in living standards opened only after the Industrial Revolution that started in England in the late 18th century and spread to Europe and North America in the 19th century. 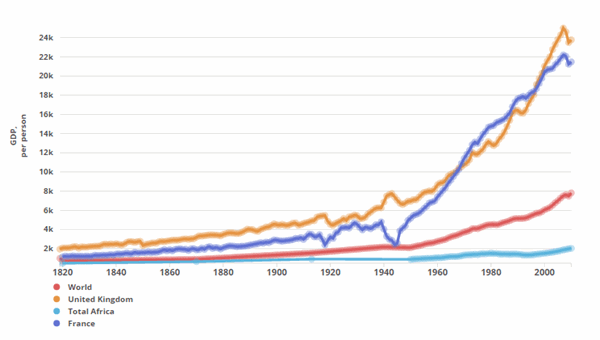 In 1870, when Europeans controlled no more than 10 per cent of the African continent (mostly North and South Africa), Western European incomes were already four times higher than those in Africa. Europe, in other words, did not need Africa in order to become prosperous. Europe colonised Africa because Europe was prosperous and, consequently, more powerful. Appreciation of the chronology of events does not justify or defend colonialism. But it does help explain it.

Africa’s fortunes under colonial rule varied. Much progress was made in terms of health and education. Maddison estimates that in 1870, there were 91 million Africans. By 1960, the year of independence, the African population grew more than threefold – to 285 million. The OECD estimates that over the same time period the share of the African population attending school rose from less than 5 percent to over 20 percent. On the down-side, Europeans treated Africans with contempt, and subjected them to discrimination and, sometimes, violence.

Since rule of law, accountable government, property rights, and free trade were European imports, they had to go.

That violence intensified during Africa’s struggle for independence, as the colonial powers tried to beat back African nationalists. As a result, African leaders took over countries where repression of political dissent was already firmly established. Instead of repealing censorship and detention laws, however, African leaders kept and expanded them.

It was precisely because colonial rule was so psychologically demeaning to Africans in general and nationalist leaders in particular that post-independence African governments were so determined to expunge many of the colonial institutions. Since rule of law, accountable government, property rights, and free trade were European imports, they had to go. Instead, many African leaders chose to emulate the political arrangements and economic policies of a rising power that represented the exact opposite of Western free market and liberal democracy – the Soviet Union.

Emulating the USSR in the 1960s was not altogether irrational. During the 1930s, the country underwent speedy industrialization, transforming a nation of peasants into a formidable power. Industrialization came at the cost of some 20 million lives, but it allowed the USSR to triumph over Hitler’s Germany (at a cost of an additional 27 million lives). By the early 1960s, the country not only produced massive amounts of steel and armaments, but also seemed poised to win the scientific contest with the West, when Yuri Gagarin became the first man in space on April 12, 1961.

The astonishing wastefulness and backwardness of the Soviet economy did not become apparent until the 1970s. By that time, unfortunately, the socialist bacillus infected much of Africa, which adopted one-party government that destroyed accountability and the rule of law, undermined property rights and, consequently, growth. Price and wage controls were imposed, and free trade gave way to import substitution and autarky. 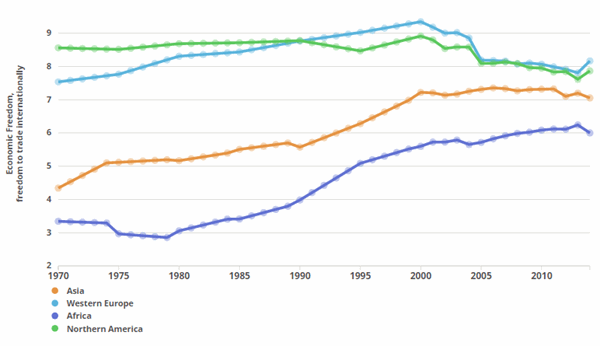 Africa’s love affair with socialism persisted until the 1990s, when, at long last, Africa started to reintegrate into the global economy. Trade relations with the rest of the world were somewhat liberalized and African nations started to deregulate their economies, thus climbing up the rankings in the World Bank’s Ease of Doing Business report.

That said, even today, Africa remains the least economically free and most protectionist continent in the world. That – and not free trade – is the problem.