Hong Kong's Example for the Rest of Us

The UK could serve as a beacon of freedom and prosperity for Europe the way Hong Kong did for mainland China.

Twenty years ago on Saturday, Britain handed sovereignty of Hong Kong to China. Today, the territory that the British State Secretary for Foreign Affairs Viscount Palmerston once described as “a barren island with hardly a house upon it” remains one of the world’s greatest cities, and its citizens enjoy one of the world’s highest standards of living.

To get a sense of Hong Kong’s success, consider the life of an elderly Hong Kong resident. Imagine an 84-year-old woman, who was born in 1932 and escaped, along with many thousands, from the mainland to Hong Kong shortly after the 1949 Revolution. In 1950, she would have been just short of her 18th birthday. What kind of a world would she have known? 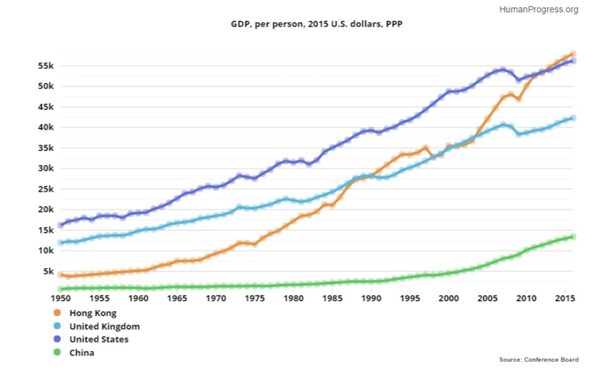 Hong Kong vs. China through the Years

Hong Kong, with an average GDP per capita of $4,120, must have looked like paradise compared to China, where GDP per capita was $644. That was, after all, part of the reason why the woman would have defected in the first place. But compared to the advanced countries of the West, Hong Kong was still a relative backwater.

Average per capita incomes in the United Kingdom and the United States stood at $11,921 and $16,197 respectively (all figures are in 2015 U.S. dollars adjusted for purchasing power). In other words, the average resident of the colony earned 35 percent and 25 percent compared to British and American citizens respectively. Today, average income in Hong Kong is 37 percent and 3 percent higher than that in the United Kingdom and America.

Thus, on two of the most important measures of human wellbeing, which is to say time spent on Earth and the material comfort enjoyed during that time, Hong Kong must surely be considered as one of the greatest success stories of all time. 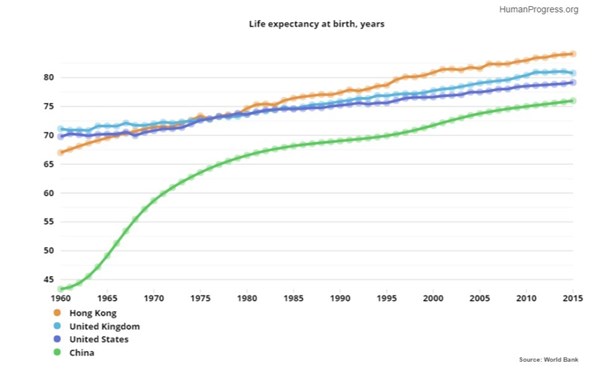 As a British colony, Hong Kong was blessed with property rights, equality before the law, and an independent judiciary. While the colony never became a full-fledged democracy, its citizens did enjoy civil freedoms, including those of expression, press, religion, and movement.

Unlike some British ex-colonies and the United Kingdom itself, Hong Kong never experimented with socialism. Historically, the government played only a minor role in the economy, restricting itself to providing subsidized housing to the refugees from mainland China.

The territory kept taxes flat and low (around 17 percent of personal and corporate income), government spending as a percentage of the GDP never reached more than 11 percent of GDP, and the budget was balanced. The territory followed a policy of unilateral trade liberalization, which is to say that the colony allowed other countries to export to Hong Kong tariff-free, regardless of whether other countries reciprocated or not.

As such, Hong Kong was alternatively the freest and the second freest economy in the world between 1970 and 2014 (these are the first and the last years for which data collected by the Fraser Institute’s Economic Freedom of the World report are available). 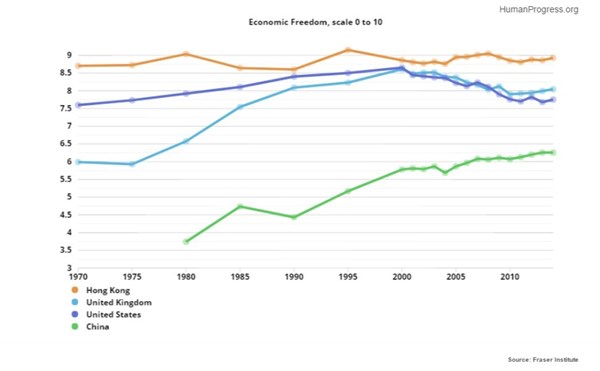 Economic freedom benefited millions of people in Hong Kong. More importantly, it benefited hundreds of millions of people in mainland China. As the territory grew ever richer, the Chinese communists were forced to admit the failure of socialism, embarking on their own road to great enrichment in 1978. Between that year and 2016, Chinese incomes grew sevenfold, resulting in the greatest poverty reduction in human history.

The link between economic freedom and growth, as irrefutably exemplified by Hong Kong, ought to be of interest to British decision-makers as the UK prepares to exit from the EU. After Brexit, the UK could try to replicate Hong Kong’s success by adopting growth-maximizing policies, including tax-cutting, further deregulation of the business environment, and unilateral free trade liberalization.

Should Britain choose to follow Hong Kong’s example, embrace greater economic freedom, and prosper as a result, other European countries might be tempted to follow in British footsteps. In that sense, the United Kingdom could serve as a beacon of freedom and prosperity for Europe in the same way that Hong Kong served as a beacon of hope for mainland China.

In 1755, the great Scottish economist Adam Smith gave “a pithy description of what he thought the government should do to encourage economic development.” He wrote,

Little else is requisite to carry a state to the highest degree of opulence from the lowest barbarism, but peace, easy taxes, and a tolerable administration of justice; all the rest being brought about by the natural course of things. All governments which thwart this natural course, which force things into another channel, or which endeavor to arrest the progress of society at a particular point, are unnatural, and to support themselves are obliged to be oppressive and tyrannical.

Hong Kong prospered because it followed Smith’s recommendations. Britain does not have to reinvent the wheel. All it needs to do is to embrace her own intellectual heritage and the principles of political and economic freedom, which were British gifts to humanity in the first place.