It is important that society is exposed to wrong ideas in order to strengthen their belief in the right ones.

President Donald Trump has seemingly gone back and forth on his opinion of the First Amendment. Just a couple of months ago, the president issued an executive order tying federal research funding to free speech protections given by colleges and universities.

Is Burning the Flag Free Speech?

Like many college students, I applauded this as a victory for freedom of speech. I was thrilled that we students could enjoy the freedom to express our opinions and encourage intellectual diversity anywhere on campus—not just in designated “free speech zones.” Then the president made the following tweet:

This tweet is troubling for several reasons. It means the president is not the crusader for free speech he may have earlier appeared to be. This should not come as a shock, however, as Trump is a populist: His stances are often based not on ideologies or absolutes but on what he believes will resonate the best with his base. What is more troubling is how those who pay lip service to conservatism and to defending the Constitution have readily thrown themselves behind the president’s statement.

For example, Candace Owens tweeted the next day that while there should be no jail time or fines imposed on Americans who have set the American flag ablaze, they should be given a year to liquidate their assets and “get the hell out of our country.” When the constitutionality of her campaign promise was questioned, she justified her stance by claiming that the First Amendment includes certain exceptions, citing specifically the fact that it is illegal to yell “fire” in a crowded building. 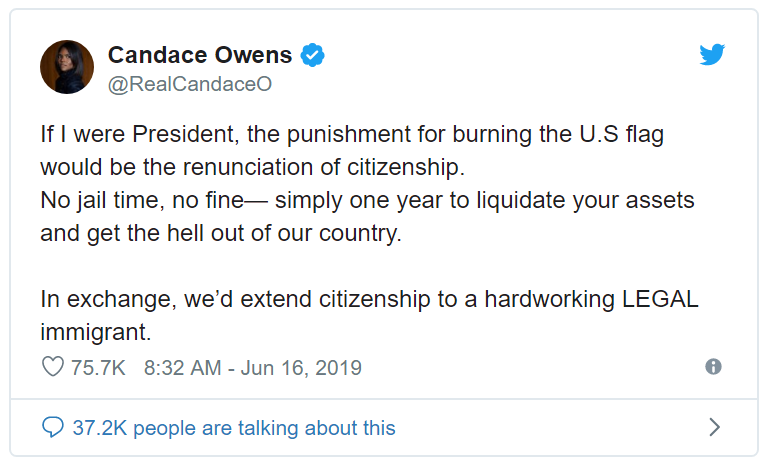 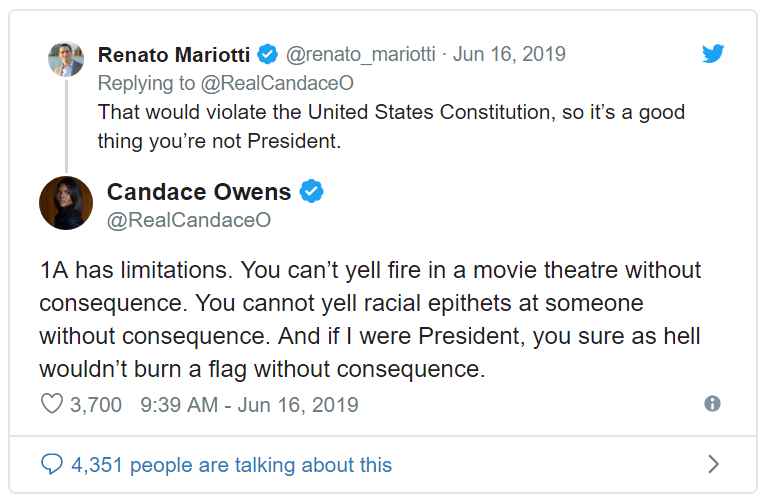 Without delving into the constitutionality of laws such as yelling “fire” in a movie theater, or hate speech laws, there are plenty of reasons why making flag burning illegal is dangerous to our republic and contrary to the founding principles of the United States.

For the people to rule wisely, they must be free to think and speak without fear of reprisal.

Madison believed that the right to free speech should be absolute, as the fear of punishment for having the wrong opinion would deter people from speaking out against the state. James Madison was not alone in this view.

John Stuart Mill’s reasoning for the importance of absolute freedom of speech was four-fold. First, for a governing body to deny the right of a person to say something is to say that it knows, in absolute terms, what is right and what is wrong. To deny anybody of the right to express an opinion is to claim infallibility. And to be clear, the US government (as well as President Trump) is by no means infallible.

Second, Mill taught that in silencing a belief, even a false one, a government may still be silencing some truth. Just because someone has an opinion that is wrong on the whole does not mean that every aspect of the opinion is wrong. Third, a belief, even when true, is held more strongly when it withstands scrutiny. Flag burning sends a powerful message and should not be taken lightly. However, we must fight for the universal right to do it on any occasion.When an idea is accepted without being challenged, says Mills, it is not held as strongly and is at greater risk of being lost in the future.

Therefore, it is important that society is exposed to wrong ideas in order to strengthen their belief in the right ones. Finally, Mill taught that any abridgment of the right to free speech carries the risk of the entirety of the right falling. We see this in Owens’ argument. If society agrees that one form of speech should be punished, why not this one, as well?

If Mill’s warning is to be believed, the president and Miss Owens are heading down a slippery slope. There are going to be instances where free speech makes people uncomfortable, but it is the bedrock of a free society, and when it is chipped away, a people risks the very institutions that were built because of it. Flag burning sends a powerful message and is an act that should not be taken lightly. However, it is imperative that we fight for the universal right to do it on any occasion.

Courtland Culver was a summer intern at FEE. Courtland is a recent graduate of the Florida State University where he received his Bachelor of Science Degree in Economics.