He knew it was wrong that his master could take his earnings.

Frederick Douglass (1818-1895) is an American hero, a man born a slave who sought and achieved his own freedom – and lived to tell the story in writings and lectures.

But what strikes me most about his book My Bondage and My Freedom is the riveting story of what inspired his escape. His slavery was backed by the force of law, but he felt it most intensely as a practical matter when he gained his first taste of freedom.

His master had come to trust him enough to market his skills outside of the master’s direct control. He had become very good at caulking. At the age of twenty, he proposed to his master that he be permitted to work and remit a sizeable portion of his earnings to his owner. The master agreed.

Douglass tells the story of how he started to earn money. This gave him a sense of his value as a human being, same as anyone else. And with money came some element of volition. When his master took a sizeable portion of it, he knew it was wrong. This was money he had earned. It was his. No man had the right to take it from him.

Now, to be sure, Douglass was writing before the income tax. The whole idea of freedom was that no man could take from you what was yours. If you made it, you could keep it. Here was a practical application of what it meant not to be a slave. And Douglass knew it.

The practice, from week to week, of openly robbing me of all my earnings, kept the nature and character of slavery constantly before me. I could be robbed by indirection, but this was too open and barefaced to be endured. I could see no reason why I should, at the end of each week, pour the reward of my honest toil into the purse of any man.

The thought itself vexed me, and the manner in which Master Hugh received my wages, vexed me more than the original wrong. Carefully counting the money and rolling it out, dollar by dollar, he would look me in the face, as if he would search my heart as well as my pocket, and reproachfully ask me, ‘Is that all? — implying that I had, perhaps, kept back part of my wages; or, if not so, the demand was made, possibly, to make me feel, that, after all, I was an ‘unprofitable servant.’

Draining me of the last cent of my hard earnings, he would, however, occasionally—when I brought home an extra large sum—dole out to me a sixpence or a shilling, with a view, perhaps, of kindling up my gratitude; but this practice had the opposite effect — it was an admission of my right to the whole sum. The fact, that he gave me any part of my wages, was proof that he suspected that I had a right to the whole of them. I always felt uncomfortable, after having received anything in this way, for I feared that the giving me a few cents, might, possibly, ease his conscience, and make him feel himself a pretty honorable robber, after all!

It was this that led Douglass to plot his escape. He seethed ever more over having to give up his earnings or any portion of his earnings. Once he took a weekend off, and he was punished by his master. He retaliated by not working at all, which vexed his master more. Then he got clever and started paying more than was required, causing his master to trust him.

Master Hugh seemed to be very much pleased, for a time, with this arrangement; and well he might be, for it was decidedly in his favor. It relieved him of all anxiety concerning me. His money was sure. He had armed my love of liberty with a lash and a driver, far more efficient than any I had before known; and, while he derived all the benefits of slaveholding by the arrangement, without its evils, I endured all the evils of being a slave, and yet suffered all the care and anxiety of a responsible freeman.

“Nevertheless,” thought I, "it is a valuable privilege another step in my career toward freedom." It was something even to be permitted to stagger under the disadvantages of liberty, and I was determined to hold on to the newly gained footing, by all proper industry. I was ready to work by night as well as by day; and being in the enjoyment of excellent health, I was able not only to meet my current expenses, but also to lay by a small sum at the end of each week….

It was this small sum that he saved that permitted him to buy a ticket on what was called the underground railroad, and eventually find his way to freedom.

Chattel slavery is a grave moral evil, on a level incomparable to bad tax policy. Nonetheless, commerce, in the life of Douglass, served as the inspiration and the means for obtaining freedom – and freedom from what? From his personal equivalent of the tax man who dared to take from his hands that which his own hands had earned.

Now you see why FEE is offering this beautiful shirt. No struggle, no progress. 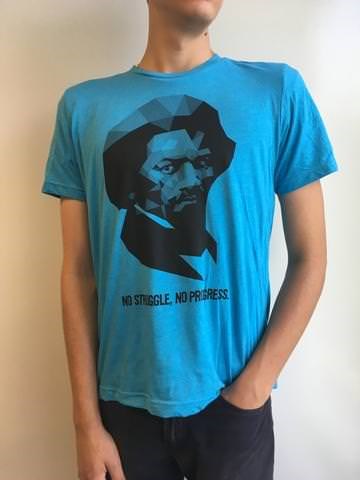