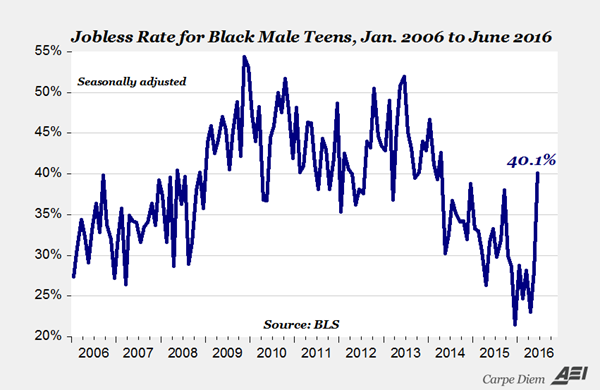 Perhaps one of the more interesting data points from last week's Employment Report is displayed in the graph above, which shows that the jobless rate for black male teens (aged 16-19 years) increased to 40.1% in June from 28.1% in May. Except for a slightly higher increase of 12.2 percentage points during the aftermath of the Great Recession, the 12 percentage point increase in June was the highest monthly increase in history going back to 1972 when the BLS starting keeping records for this series. One possible explanation for this spike would be the “midyear burst of minimum-wage increases on July 1” outlined in a recent WSJ article:

On July 1, 14 U.S. cities, states and counties, plus the District of Columbia, will raise their minimum wage in a mid-year burst that reflects the legislative momentum to boost pay floors across the country while federal legislation stalls. In total, the minimum wage will rise in 15 places: two states – Maryland and Oregon, plus Washington, D.C., Los Angeles County, Calif., and 11 cities. That includes Chicago, eight cities in California and two in Kentucky, according to a new analysis by the right-leaning Employment Policies Institute.

As we learned from Milton Friedman many years ago:

The minimum wage law is most properly described as a law saying that employers must discriminate against people who have low skills. That’s what the law says. The law says that here’s a man who has a skill that would justify a wage of $5 or $6 per hour (adjusted for today), but you may not employ him, it’s illegal, because if you employ him you must pay him $7.25 per hour. So what’s the result? To employ him at $7.25 per hour is to engage in charity. There’s nothing wrong with charity. But most employers are not in the position to engage in that kind of charity. Thus, the consequences of minimum wage laws have been almost wholly bad. We have increased unemployment and increased poverty.

MP: As I commented when I posted the minimum wage chart today on Twitter: “Will a $15 an hour minimum wage make it easier or harder for this group to find a job? Progressives, please discuss.”