Finland To End Its Experiment with Universal Basic Income

The Finnish government has decided to stop handing out requirement-free money.

I’ve repeatedly expressed skepticism about the idea of governments providing a “basic income” because I fear the work ethic will (further) erode if people automatically receive a substantial chunk of money.

Moreover, I also fear that a basic income will lead to an ever-expanding burden of government spending, particularly once net beneficiaries figure out they can vote themselves more money.

Given these concerns, I should be happy about this report from the New York Times.

For more than a year, Finland has been testing the proposition that the best way to lift economic fortunes may be the simplest: Hand out money without rules or restrictions on how people use it. The experiment with so-called universal basic income has captured global attention… Now, the experiment is ending. The Finnish government has opted not to continue financing it past this year, a reflection of public discomfort with the idea of dispensing government largess free of requirements that its recipients seek work. …the Finnish government’s decision to halt the experiment at the end of 2018 highlights a challenge to basic income’s very conception. Many people in Finland—and in other lands—chafe at the idea of handing out cash without requiring that people work. …Finland’s goals have been modest and pragmatic. The government hoped that basic income would send more people into the job market to revive a weak economy. …The basic income trial, which started at the beginning of 2017 and will continue until the end of this year, has given monthly stipends of 560 euros ($685) to a random sample of 2,000 unemployed people aged 25 to 58. Recipients have been free to do as they wished… The Finnish government was keen to see what people would do under such circumstances. The data is expected to be released next year, giving academics a chance to analyze what has come of the experiment.

The reason I’m conflicted is that the current welfare state—both in the United States and other developed nations—is bad for both taxpayers and poor people. 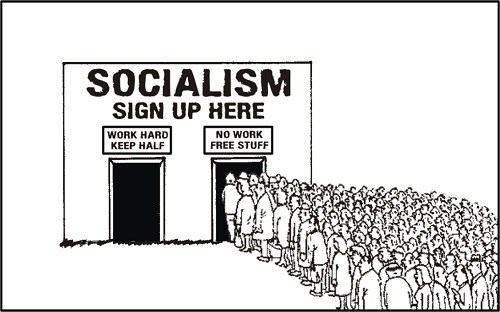 So I like the idea of experimentation. There has to be a better way of alleviating genuine suffering without trapping poor people in dependency or punishing taxpayers.

Indeed, one of my arguments for radical decentralization in America is that states will try different approaches and we’ll have a much better chance of learning what works and what doesn’t.

And maybe we’ll learn that there are some benefits of providing a basic income. But, as reported by the U.K.-based Guardian, it’s unclear whether the Finnish experiment lasted long enough or was comprehensive enough to teach us anything.

The scheme—aimed primarily at seeing whether a guaranteed income might incentivise people to take up paid work by smoothing out gaps in the welfare system …it was hoped it would shed light on policy issues such as whether an unconditional payment might reduce anxiety among recipients and allow the government to simplify a complex social security system… Olli Kangas, an expert involved in the trial, told the Finnish public broadcaster YLE: “Two years is too short a period to be able to draw extensive conclusions from such a big experiment. We should have had extra time and more money to achieve reliable results.”

I will be interested to see whether researchers generate any conclusions when they look at the two years of data from the Finnish experiment.

That being said, there already has been some research that underscores my concerns.

The OECD is not my favorite international bureaucracy, but its recent survey on Finland included some sobering estimates on the cost of a nationwide basic income.

In a basic income scenario, a lump-sum benefit replaces a number of existing benefits, financed by increasing income taxation by nearly 30% or around 4% of GDP. …the basic income requires significant increases to income taxation. …Financing a basic income at a meaningful level thus would require considerable additional tax revenue, and heavier taxation of income would at least partially undo any improvement in work incentives.

And in a report on basic income last year, the OECD poured more cold water on the idea.

…large tax-revenue changes are needed to finance a BI at meaningful levels, and tax reforms would therefore need to be an integral part of budget-neutral BI proposals. …abolishing tax-free allowances and making BI taxable means that everybody would pay income tax on the BI, and on all their other income. Tax burdens would go up for most people as a result, further increasing tax-to-GDP ratios that are currently already at a record-high in the OECD area. …There are also major concerns about unintended consequences of a BI. An especially prominent one is that unconditional income support would reduce the necessity for paid work.

Indeed, it’s difficult to see how work incentives aren’t adversely affected. Why go through the hassle of being employed when you can sit at home and play computer games all day?

P.S. Given the option of voting on a basic income in 2016, Swiss voters overwhelmingly rejected the notion.

P.P.S. Former Vice President Joe Biden actually agrees with me about one of the downsides of basic income.