Atlanta, Ga.–The Foundation for Economic Education (FEE) has identified current priority issues and attitudes among Millennials and members of Generation Z in a new survey of American youth taken in 2017. Regardless of ideological labels, young people have prioritized a concern with government corruption. The survey also confirmed a high degree of interest among most ideological groups in environmental issues, the cost of higher education, terrorism, and poverty alleviation.

FEE commissioned the survey in partnership with MarketLab to determine the demographics and opinions of various segments of youth and young adults aged 14-34 years. The study is part of FEE’s Youth Education and Audience Research (“YEAR”) project–funded in large part by the John Templeton Foundation–to expand FEE’s target market and understand the types of free-market educational content that resonate with younger audiences. 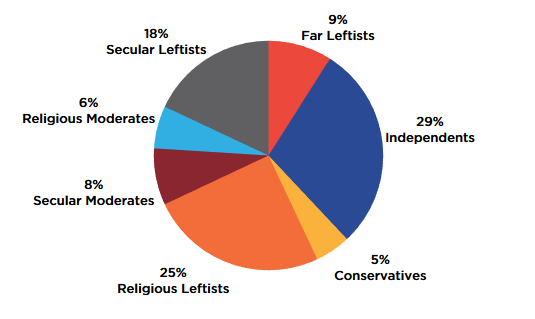 For purposes of the YEAR project, FEE examined four groups in detail: Conservatives, Independents, Secular Moderates, and Religious Moderates, which constitute 48 percent of the total sample.

Insights from the survey will motivate and inform FEE’s content production and marketing efforts. For example, Millennials pay attention to multiple current issues, shown in Figure 2. Poverty, climate change, and rising costs of education are critical issues to members of the Secular Left, while terrorism is extremely important to Conservatives. Conservatives, Secular Leftists, and Secular Moderates viewed government corruption as a significant problem.

Members of each group identified with multiple political and ideological labels used in the current political climate. The majority of all Millennials prefer the label “Independent,” although the “Libertarian” label resonated fairly strongly among all four groups.

Many Millennials demonstrated an interest in global affairs, indicating that they like to keep up on international developments and openness to other cultures. They also displayed interest in their own futures–with an emphasis on personal finance and entrepreneurship.

The life stage of the millennials appears to account for the issues which concern them the most. While younger high school students are predominantly concerned with terrorism (44% see it as an “extremely big problem”),  college students show greater interest in addressing the cost of education, government corruption, global warming, and poverty, while older Millennials are less concerned about big problems, they are more likely to have a strong political affiliation. Music, however, was the single interest that traversed all age groups.

FEE plans to use these insights to further refine content creation and marketing strategies. Moving forward, FEE will create more content around the relevant interests and prominent attitudes of youth in order to target each persona individually.

FEE has been a leading non-profit organization in teaching the principles of a free society since its founding in 1946 by Leonard E. Read. Today, FEE focuses on introducing freedom as a life philosophy to young newcomers, striving to bring about a world in which the economic, ethical and legal principles of a free society are familiar, credible, and compelling to the next generation. FEE produces the annual FEEcon event, student seminars, free online courses, classroom resources, and engaging classic and contemporary content available at FEE.org and on social media. FEE is supported solely by contributions from individuals, private foundations, and businesses and by the sale of our publications. We invite you to advance liberty with us at FEE.org.

The John Templeton Foundation serves as a philanthropic catalyst for discoveries relating to the Big Questions of human purpose and ultimate reality. We support research on subjects ranging from complexity, evolution, and infinity to creativity, forgiveness, love, and free will. We encourage civil, informed dialogue among scientists, philosophers, and theologians and between such experts and the public at large, for the purposes of definitional clarity and new insights. The Foundation’s vision is derived from the late Sir John Templeton's optimism about the possibility of acquiring “new spiritual information” and from his commitment to rigorous scientific research and related scholarship. The Foundation's motto, "How little we know, how eager to learn," exemplifies our support for open-minded inquiry and our hope for advancing human progress through breakthrough discoveries.