Don’t Worry About the Yuan

Especially during dismal economic times, many Americans—goaded by media figures and politicians—look with suspicion on foreigners. This tendency is most obvious in anti-immigrant sentiment, but also manifests itself in a drive for protective tariffs and other trade restrictions.

Over the past few years China’s “currency manipulation” has been a particularly hot-button issue. Pundits claim the Chinese government, by artificially suppressing the value of its currency, unfairly subsidizes Chinese exporters while destroying American jobs. Although there is truth to this claim it overlooks the benefits to American consumers from the Chinese policy. Americans should stop fretting about the Chinese currency.

To get a sense of the accusations leveled at the Chinese, we don’t need to scour letters to the editor written by economic illiterates. We can turn to Paul Krugman, who won a Nobel Prize for his work on international trade theory. Krugman has been leading the charge for punitive action against China—including retaliatory tariffs unless its government changes its ways. In a particularly bellicose column last year, “Taking on China,” Krugman wrote:

China’s policy of keeping its currency undervalued has become a significant drag on global economic recovery. Something must be done. . . . This is the most distortionary exchange rate policy any major nation has ever followed. . . . [I]f sweet reason won’t work, what’s the alternative? In 1971 the United States dealt with a similar but much less severe problem of foreign undervaluation by imposing a temporary 10 percent surcharge on imports, which was removed a few months later after Germany, Japan and other nations raised the dollar value of their currencies. At this point, it’s hard to see China changing its policies unless faced with the threat of similar action—except that this time the surcharge would have to be much larger, say 25 percent.

Before continuing we should clarify Krugman’s charges: The Chinese government uses some of its revenues in its own currency (collected from taxation, State-owned enterprises, and so on) to augment its stockpile of foreign currency reserves. In other words, in addition to spending its (yuan-denominated) revenues on tanks, bombers, and infrastructure, the Chinese government also spends some on acquiring more dollars, euros, and other currencies.

Just as the Chinese government’s purchases of, say, gasoline for its military equipment would tend to push up the yuan-price of gasoline, its efforts to buy dollars with yuan will push up the yuan-price of a dollar. By having more yuan chase U.S. dollars in the foreign-exchange market, the Chinese government’s purchases tend to make the dollar appreciate against the yuan.

Because China’s currency is weaker than it otherwise would be, Chinese exports are cheaper: The stronger dollar allows Americans to buy more Chinese goods, and so they will favor Chinese over domestic producers. On the other hand, Chinese consumers will view American goods as more expensive because they ultimately are priced in dollars and it takes more yuan to buy one dollar at the (allegedly) distorted exchange rate.

Even if we classify the Chinese government’s policies as nothing but a pure subsidy to its exporters, they benefit Americans on net. The harm imposed on U.S.  exporters is more than offset in dollar terms by the benefits to U.S. importers and consumers.

The standard arguments for free trade apply, even in cases where foreign governments give money directly to their exporters. For example, rather than using their revenues to prop up the dollar in the foreign-exchange market, suppose instead that the Chinese government told major Chinese exporters that they could cut their prices to foreign customers and it would make up the shortfall with tax-financed subsidies.

Note that this policy too would “destroy American jobs” in particular sectors—namely, the ones competing with the subsidized Chinese exporters—but it would generally make Americans richer. To see why, consider the extreme case, where the Chinese government used its tax receipts to buy TVs, cars, and computers from its own producers, then sent the goodies to the United States for free. This would be an unambiguous gift to the American people. If the policy persisted, the U.S. economy would adapt itself to the new reality. Particular producers might be worse off, but Americans would clearly be richer in general, just as surely as if brand new cars magically fell from the sky. The American workers who previously made the goods that we could now obtain for free would be available to produce other items, increasing the total amount of consumption possible from the same amount of labor and other resources.

So if we analyze Chinese currency policies as merely a hidden subsidy to exporters, the standard arguments for free trade show that the U.S. government can only hurt Americans by retaliating (by, for example, imposing tariffs on Chinese imports). This doesn’t mean the Chinese policy is efficient on a global scale. On the contrary, the Chinese are poorer because the losses imposed on them as taxpayers and consumers are higher than the gains to the Chinese exporters, as measured in terms of material output. But it is simply wrong to conclude that “China” is hurting “America.”

In fairness, Krugman has a sophisticated Keynesian twist to the accusations, whereby the “classical” analysis I’ve conducted here breaks down because the whole world is stuck in a “liquidity trap.” I’m going to ignore this subtlety of his argument, largely because most of the people complaining about the Chinese don’t rely on it.

Now that we’ve established that the “worst case” scenario is nothing to fear, we can introduce some further complications. In the first place, the Chinese haven’t made their own currency fall against the dollar, but have merely pegged the one currency to the other, so that the yuan/dollar exchange rate was constant (for long stretches). 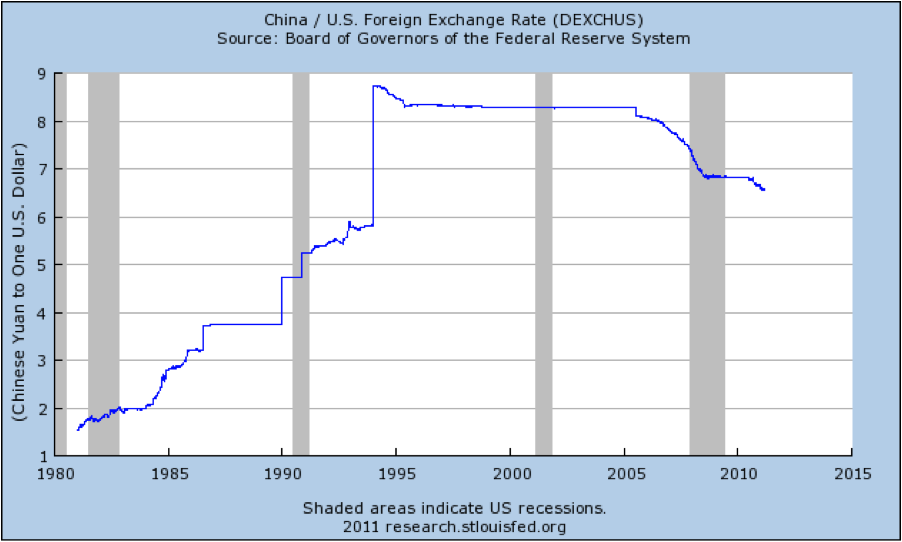 As the graph  indicates, from 1995 through 2005 the yuan/dollar exchange rate was roughly constant, and this peg was maintained by Chinese, not U.S., officials. If the yuan started to appreciate against the dollar the Chinese would sell yuan to buy dollars. On the other hand if the yuan started falling against the dollar Chinese officials would sell dollars to buy yuan and restore the exchange rate to the desired target.

To maintain their peg the Chinese needed to have a large stockpile of dollar-denominated assets. The safest such asset has been U.S. Treasury securities. To convince international investors that it is safe to put their money in China—especially after the wild currency fluctuations during the “Asian contagion” of the late 1990s—China quite understandably needed to accumulate more and more Treasury securities.

The situation for China was analogous to when the United States was on the gold standard. To reassure investors of the integrity of the dollar, the government for a long period pegged it to gold at a constant “exchange rate” of $20.67 an ounce. To back up the peg U.S. authorities obviously needed to accumulate large stockpiles of gold. If there had been only one country in the world that exported gold, the United States every year might have sent over tangible goods in exchange for the gold.

A similar analysis holds for China, with its “dollar standard.” To build up its reserves of foreign currencies—a perfectly sensible defensive move after the aforementioned Asian problems—the Chinese wanted to buy more foreign assets collectively than the rest of the world wanted to invest in Chinese financial assets. This is referred to as a “capital account deficit.”

As a matter of simple accounting, if a country (such as China) runs a capital account deficit, then it must simultaneously run a current account surplus (which is a broader category than the more familiar “trade surplus”). Intuitively, if the Chinese want to acquire financial assets (on net) from the rest of the world, then the Chinese must export goods (on net) to pay for them. After all, it is a valuable asset to have an IOU from the U.S. Treasury promising to send future streams of dollars, and a purchaser has to give up something valuable in exchange for it.

Referring back to the graph, it’s important to note that since 1995 the Chinese currency has either stayed the same or strengthened against the dollar. (When the line goes down it means the dollar buys fewer yuan; that is, the yuan appreciates against the dollar.)

When Krugman and others complain about the Chinese keeping their currency “artificially weak,” what they really mean is that the Federal Reserve—under both Alan Greenspan and Ben Bernanke—has been out-inflating the rest of the world. Under those circumstances the dollar ought to be sinking against other currencies. (Indeed, from February 2001 to February 2011, the dollar fell 31 percent against a trade-weighted basket of currencies.) In this context, if the Chinese stubbornly refuse to let the dollar weaken against their own currency, they are accused of “manipulation” to benefit themselves at the expense of the world.

To add yet more irony to the situation, notice that since June 2010 the Chinese have in fact been allowing their currency to steadily strengthen against the dollar. (This is the falling squiggly line at the end of the chart.) This has gone hand in hand with their slowdown in purchases of new debt issued by the U.S. Treasury. Yet rather than praising the Chinese for creating American jobs, most analysts are fretting over the fate of the dollar and U.S. interest rates if the Chinese don’t resume financing more of Uncle Sam’s deficits! If U.S. officials really want to eliminate an “overvalued dollar,” they should tell Bernanke to stop printing so many dollars.