Did Freedom Ruin Our Relationships?

Would we be happier with less choice?

Over at the Week, Damon Linker sees the “paradox of choice” at work in an unlikely place: love and romance. Our young people, he says, have too many romantic choices.

The paradox of choice works like this: Let someone pick between two kinds of jam, and they'll pick the one they like the best, and they'll know it. The result is a happy consumer.

But let someone pick among a hundred kinds of jam, and they'll get... frustrated. They'll vacillate. They'll second-guess. And there goes all their happiness. A bigger menu has only made things worse.

Now, preferences aren't supposed to work that way. Not if we're being rational (at least by some accounts of rationality). But we're not fully rational, says this theory, and so... too much choice can bother us.

The paradox of choice seems custom-tailored for memetic success: It's contrarian. It's fashionably anti-consumer, without demanding too much in the way of personal asceticism. It's anti-rational, in that special, cowardly way that lets adherents sneak back to a slightly greater rationality than the rest of us schmucks. In fine, it's reassuringly snobby.

Unfortunately, the economic research on the paradox of choice just doesn't hold up all that well — not even in consumer goods, where the idea was first hatched. As to lab results, a meta-analysis of the paradox has found virtually zero effect. Perhaps more work needs to be done, but for now, the preponderance of the evidence says no.

Out in the field, IHOP seems to have used the paradox to inform a new menu design, but it's only modestly boosted sales, even without controlling for all the other menu changes that IHOP made at the same time. (Does ordering more pancakes make you happier? I'd guess that more people would regret buying, rather than not buying, those extra pancakes, so you tell me.)

Which brings us, I suppose, to romance. Linker writes:

In their personal lives, Americans have never been freer — from obligations, expectations, restrictions, constraints. Most of us consider this a hard-won achievement, a sign of progress beyond the limitations with which our parents, and their parents, and their parents' parents, had to contend. But is it really progress? Are we happier in our boundless autonomy — or more miserable?

As evidence of our collective misery, Linker cites this essay by Columbia University sophomore Jordana Narin. It's about a relationship of hers that lived, and died, without so much as a label. Whenever the question of labels came up, she simply talked around it, and so did he. Was their relationship sexual? Yes. Was it romantic? Who knows.

Heartbreakingly, Narin never even knew when to move on. Having never been a couple, she and her Jeremy could hardly break up. And that's a problem, as I think all parties would agree.

Narin's essay is certainly an angsty piece of work. That's not a dig; if you're a college sophomore who isn't visibly angsty, you're probably hiding something.

Along the way, Narin raises some superlative questions about the wisdom of the unlabeled relationship, and about whether one can cross from a casual affair to something more enduring, and about how the casual can be the enemy of the sincere. Her work fully deserved the award that it won.

Her essay is a lot of things, including wise and moving. But evidence for the paradox of choice it is not: If Narin had any other romantic choices at the time, she declines to say. Her choices seem to have been few, or easily made, or both.

So what went wrong? Narin writes: "I told myself a lot of things I never told him." Now, I'm not an advice columnist, but if I had to guess, I'd say she's found the problem.

To repeat: she's a college sophomore, writing about some mistakes she started making in high school. She's not a woman of fifty looking back at a wasted youth, a lifetime of regret born of too many options. She's hardly a lost cause.

And, with the benefit of hindsight, she even has a familiar name for her predicament: the One Who Got Away. Back in my day, when things weren't really all that different, there was hardly a college sophomore who didn't have One Who Got Away.

So where was Linker headed with all of this? Here:

Marriage was once close to ubiquitous, and couplings were often arranged by families. When they weren't arranged, they nearly always took place within rigidly defined cultural, religious, and ethnic boundaries. By the age of 25, and usually long before, you were bound to another person, in most cases for life. . . .  Individuals might fight against received constraints, but in the end the constraints always won.

Or at least, they did for a long time. In more recent centuries and decades, we've seen a slow but dramatic shift in the direction of individual autonomy, accelerating to the present day. It began with the rise of the ideal of romantic love, which led to marriages based more and more often on free choice. Eventually the old cultural, religious, and ethnic boundaries broke down, making way for all sorts of once-unthinkable intermarriages.

And all sorts of once-unthinkable reasons to end a marriage. First there was an escape clause for abuse and abandonment, then a list of lifestyle considerations (including a couple "growing apart"). Eventually divorce could dissolve a supposedly indissoluble, ostensibly life-long bond for any reason at all, without attributing "fault" to either party. . . .

And yet, for all of these changes, the institution of marriage, plus at least some of those norms and practices, persisted as a cultural ideal.

Until now, that is. With the rise of the millennial generation, marriage itself — along with formal dating, exclusive dating ("going steady"), and engagement — has come to seem for many like an unwanted obstacle to personal autonomy. And it's easy to understand why.

Now, if I wanted to play hardball, right here is where I would wonder aloud whether Damon Linker really meant to condemn inter-ethnic marriage. After all, he describes it as a choice, in an essay about how we have too many romantic choices. Presumably we would gain something by giving it up. Presumably we would also gain if we crossed off all those other choices, too. We might even be happiest if we just left the choice to our parents.

Of course, I don't believe that Linker thinks any of these things. But he did bring them up, and I guess the most charitable thing I can do is to stroke my chin, and wonder why, and move on.

Linker's real target here — the one he means us to talk about — is “hookup culture.”

The problem with worrying about hookup culture is that it's not a new choice. It's not even a choice that more millennials are making.

As we talk about it today, hookup culture is simply a moral panic.

As journalist Amanda Hess has ably demonstrated, the data paints a very different picture from the one we oldsters seem inclined to imagine. Teen pregnancy is down. Most STIs are down. Hooking up isn't common, isn't well-regarded among college students, and isn't on the rise.

Controlling for age, 40 years of survey data says that millennials are having less casual sex than either of the two generation s that went before them. Who had the most? The boomers. Go figure: Hookup culture is something your grandparents did — which... Ew. 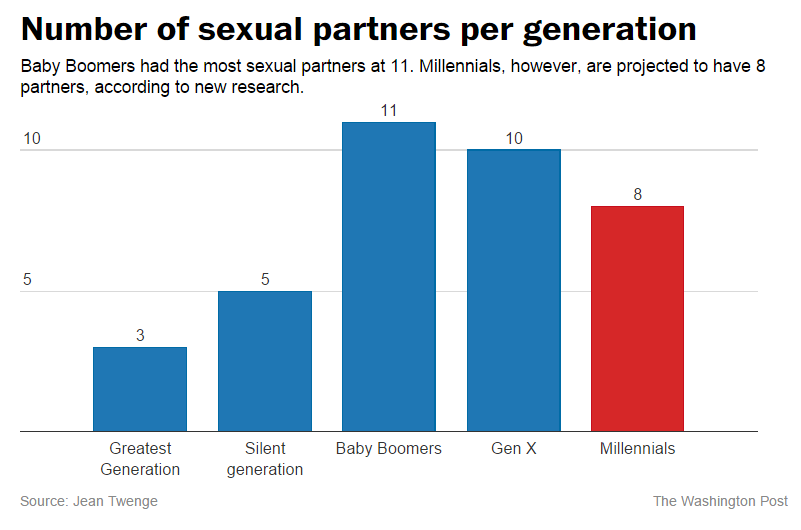 Moreover, marriages rates might be going down, but not because divorce is going up. Marriages in the 2000s are less likely to end in divorce than any time since the ‘60s, and divorce rates have been in decline for decades. 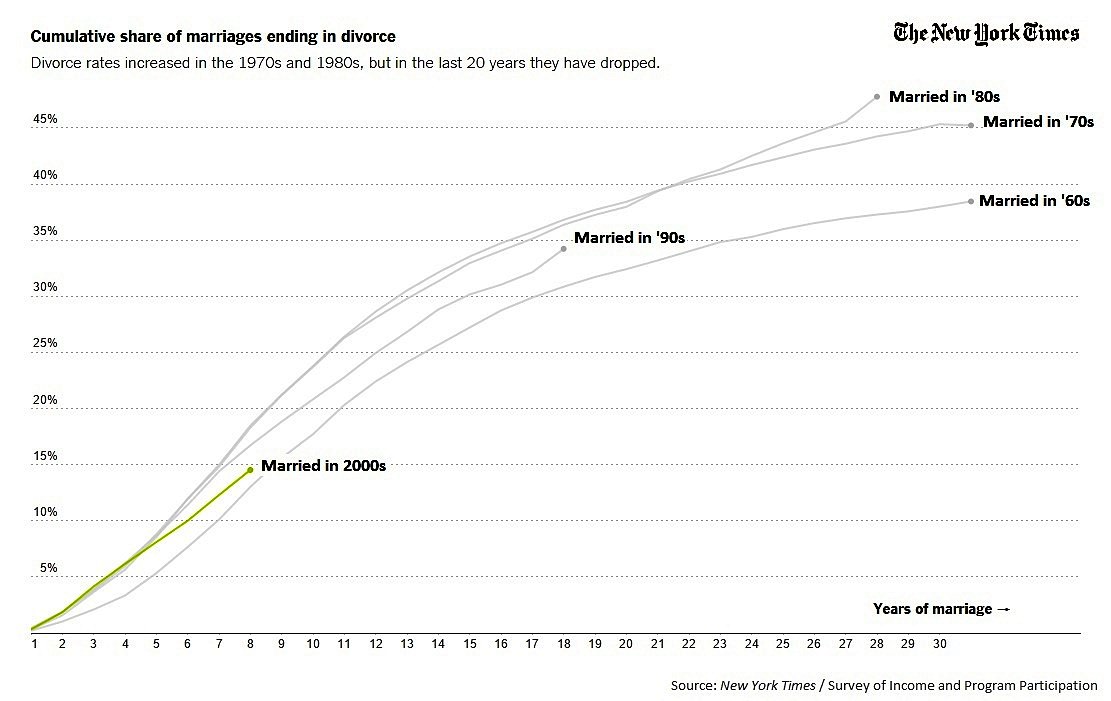 None of this has stopped most journalists from writing as if something dreadful were going on, and Linker is certainly no exception.

The paradox of choice is empirically dubious even on its home turf; it's preposterous to deploy as an explanation for a nonexistent social trend, and surely cannot illuminate the angst of our heartbroken college sophomores.