Here are five things the Post got wrong about capitalism.

It’s time to add to that list. In a column for the Washington Post, Steven Pearlstein claims to have identified “Five myths about capitalism.” He’s not necessarily attacking free enterprise, but he does make several points that rub me the wrong way and/or should be addressed. Here’s his introduction.

Thirty years ago, in the face of a serious economic challenge from Japan and Europe, the United States embraced a form of free-market capitalism that was less regulated, less equal, more prone to booms and busts. Driving that shift was a set of useful myths about motivation, fairness and economic growth that helped restore American competitiveness. …Here are five of the most persistent ones.

Before we get to his myths, I can’t resist questioning his assertion that markets lead to “more booms and busts,” in part because we had very long and strong expansions during the market-oriented Reagan and Clinton years and in part because the big 2008 recession was largely a result of bad government policy.

But let’s set that aside and look at Pearlstein’s myths. Here’s his first assertion.

Adam Smith, the father of economics, first pointed out in his most famous work, “The Wealth of Nations ,” that in vigorously pursuing our own selfish interests in a market system, we are led “as if by an invisible hand” to promote the prosperity of others. …Smith, however, was never the prophet of greed that free-market cheerleaders have made him out to be. In other passages from “The Wealth of Nations,” and in his earlier work, “The Theory of Moral Sentiments,” Smith makes clear that for capitalism to succeed, selfishness must be tempered by an equally powerful inclination toward cooperation, empathy and trust—traits that are hard-wired into our nature and reinforced by our moral instincts. …An economy organized around the cynical presumption that everyone is greedy is likely to be no more successful than one organized around the utopian assumption that everyone will act out of altruism.

This isn’t really a myth as much as a misrepresentation. What “free-market cheerleaders” extol Smith as a “prophet of greed”?

I self-identify as one of those cheerleaders, and I simply point to Smith’s famous observation about how self-interest is what drives merchants to improve our lives.

Do some people go crazy with greed? Of course.

But that’s true in any system (look at how Chavez’s family members lined their pockets).

What makes capitalism a preferable system is that greedy people have to cater to consumers if they want more money.

This is an almost universal belief among corporate executives and directors—that it is their principal mission and legal obligation to deliver the highest possible return to their shareholders. The economist Milton Friedman first declared in the 1970s that the “one social responsibility of business [is] . . . to increase its profits,” but the corporate raiders of the 1980s were the ones who forced that view on executives and directors, threatening to take their companies or fire them if they didn’t go along. …“maximizing shareholder value”…is now widely taught by business schools, ruthlessly demanded by Wall Street’s analysts and “activist” investors, and lavishly reinforced by executive pay packages tied to profits and share prices. In fact, corporations are free to balance the interests of shareholders with those of customers, workers or the public… Legally, corporations can be formed for any purpose. …The only time a corporation is obligated to maximize its share price is when it puts itself up for sale.

I’m not sure what point he’s making. Does he think companies shouldn’t try to make profits? Does he not understand the purpose of profits? Does he want to put corporate governance under the control of politicians, like Elizabeth Warren?

For what it’s worth, he’s correct that corporations can be set up for reasons other than profit, though I’m not sure that’s any sort of stunning revelation.

The theory of “marginal productivity” holds that a worker’s wage or salary reflects the “amount of output the worker can produce,” according to Harvard’s Greg Mankiw, author of a best-selling economics textbook. This idea is useful in constructing economic models, but Mankiw and others have also relied on it to justify widening income inequality and to oppose proposals to redistribute income… In reality, however, the pay set by markets is also subjective, reflecting the laws and social norms under which markets operate. The incomes earned by workers who planted tobacco—and those who owned tobacco plantations—changed considerably after slavery was abolished, and again after laws protecting sharecroppers were enacted, and again when minimum-wage laws were passed… While it is probably better to rely on markets rather than government to set pay levels, that doesn’t mean that the way the markets set pay is a purely objective assessment of economic contribution or that redistribution is theft.

I’m glad he acknowledges that it is “probably better” for markets to set wages, but this section is largely incoherent.

He writes about slavery, but that has nothing to do with capitalism. After all, slavery was government-sanctioned and government-enforced involuntary labor, whereas a defining feature of capitalism is voluntary exchange.

Now for the fourth myth.

The reason Americans tolerate higher levels of income inequality is because of our faith that we all have a fair chance at achieving the American Dream or becoming the next Bill Gates. “In America we stand for equality,” writes Arthur Brooks of the American Enterprise Institute, a leading defender of the morality of capitalism. “But for the large majority of us, this means equality of opportunity, not equality of outcome.” …But while the United States has made great strides in removing legal barriers to equal opportunity, at least half the difference in income between any two people is determined by their parents, either through inherited traits like intelligence, good looks, ambition and reliability (nature), or through the quality and circumstances of their upbringing and education (nurture). …Unless we are prepared to engage in extensive genetic reengineering, or require that all children be brought up in state-run boarding schools, we must acknowledge that we can never achieve full equality of opportunity.

This section actually makes some sense. Some people do have better parents and better genes, and that does put them in a better position to succeed.

In any event, I very much hope that Pearlstein doesn’t think that government-imposed “genetic reengineering” and/or “state-run boarding schools” are good ideas.

Here’s the final myth, and also the one that got me most agitated.

Economists have long believed that there is an unavoidable trade-off between equality and growth—having more of one means having less of the other. Arthur Okun’s book about it, “Equality and Efficiency: The Big Tradeoff,” remains a classic. The implosion of communism and the decisions of socialist countries like Sweden to reduce taxes and welfare are widely seen as acknowledgments of the failure of overly egalitarian systems to produce adequate economic growth. But evidence suggests that there is also a point at which high levels of inequality begin to deliver less economic growth, not more—and that the United States has passed that point, according to research by the International Monetary Fund. …rising income inequality erodes the trust people have in one another and their willingness to cooperate.

I’m glad he cited Okun, and it’s also good that he cited Sweden’s turn in the right direction.

But it’s very disappointing that he called attention to the IMF’s incredibly shoddy research on inequality.

I’ll close by asking critics of capitalism to give just one accurate answer to my two-question challenge. Or, if that’s too difficult, create the left-wing version of this chart. 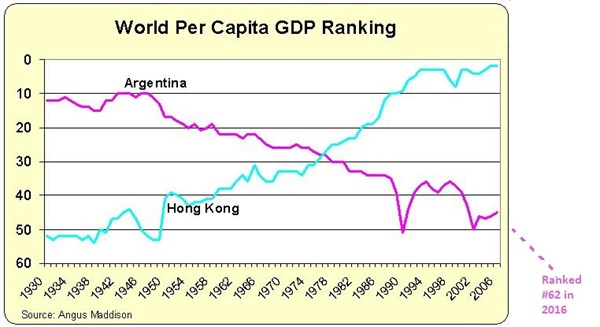 I won’t be holding my breath.