Could COVID-19 End the Government Monopoly on Education?

The pandemic could usher in a new era of school choice.

Image by Morning Brew on Unsplash

The coronavirus has been horrible news, most obviously because of death and suffering. But the disease has also wreaked havoc with the economy and given politicians an excuse to push counterproductive policies.

But if you want to find a silver lining to that dark cloud, the virus may be putting pressure on America’s government school monopoly. For instance, John Stossel explains that it may lead to more homeschooling.

Given the large amount of evidence showing superior outcomes for home-schooled students, this is definitely a much-needed bit of good news.

Matthew Hennessey, in a column for the Wall Street Journal, also opined about how the coronavirus may produce a permanent expansion of homeschooling:

Most students will return to traditional classrooms when the crisis passes. But some families—perhaps many—will…decide that homeschooling is not only a plausible option, but a superior one. …An economy of high-quality online educational materials has sprouted in the past decade. All you need is a laptop, headphones and a quiet corner of the house, and your kid can study everything from calculus to ancient Greek. …Education has managed to stave off innovation for a variety of reasons. Inertia is one—most people have a hard time reimagining something as basic as school. …Teachers unions are politically strong and uninterested in anything that threatens their power. But now the pandemic…can shake up the established order… If more Americans come to see the viability and value of home education, it could be a silver lining in a very dark cloud.

That was true before the coronavirus, and it’s even more true today. This report from the New York Times has some details:

Public schools plan to open not at all or just a few days a week, while many neighboring private schools are opening full time. …the ways in which private schools are reopening show it can be done with creative ideas…reopening plans are just another way the pandemic has widened gaps in education. Private schools were able to offer much more robust online learning last spring, and research suggests that school closures have widened achievement gaps. …Independent schools don’t have all the same regulations for the curriculum or facilities that public schools have, and teachers generally aren’t unionized.

Unsurprisingly, defenders of the status quo often claim that the government monopoly does a poor job because of inadequate money.

This is utter nonsense. I periodically share a chart put together by the late Andrew Coulson which shows how per-pupil spending in government schools has skyrocketed (with zero improvement in educational outcomes). 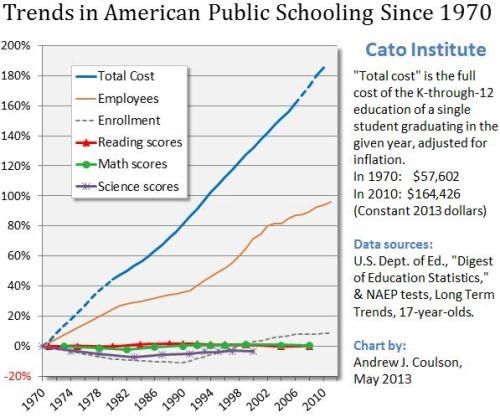 Perhaps even more relevant, it costs more, on average, for kids to attend government schools than it does for them to attend private schools.

And that assumes government schools are actually being honest about their true costs.

Yet that doesn’t seem to be the case. Researchers who have investigated the numbers have discovered pervasive under-counting (or non-counting) of big expenses such as building costs and pension obligations).

Adam Schaeffer narrated a video on this topic about ten years ago. Here’s a screenshot of the official numbers from various local governments compared to the actual costs. 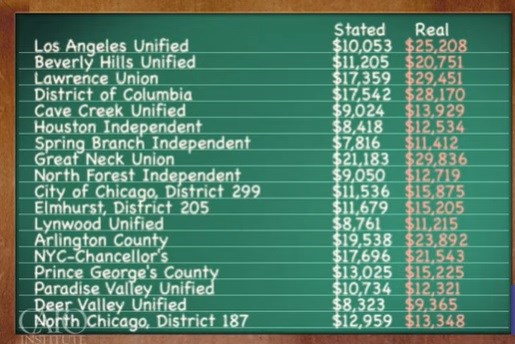 What’s the bottom line? Instead of throwing good money after bad by rewarding under-performing government schools with bigger budgets, the right answer is comprehensive school choice.