Trudeau’s tax hike was a big mistake. The only tangible results are that the private sector is now smaller and the country is less competitive.

I wrote yesterday about a handful of strange legal developments in Canada.

In a display of balance, however, I noted in my conclusion that in recent decades, Canada has been “very sensible” with regard to economic issues (spending restraint, welfare reform, corporate tax reform, bank bailouts, regulatory budgeting, the tax treatment of saving, school choice, and privatization of air traffic control).

But “very sensible” is not the same as “totally sensible.” Especially not if you count recent years.

It appears, though, that he wasn’t aware of a concept known as the Laffer Curve (or, like some folks on the left, maybe he simply didn’t care). 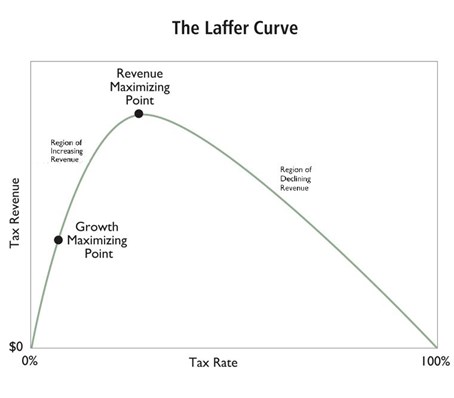 Here are some excerpts from a story in the Globe and Mail:

The Liberal government’s tax on Canada’s top 1 per cent failed to produce the promised billions in new revenue in its first year, as high-income earners actually paid $4.6-billion less in federal taxes. …The latest available tax records show that revenue from Canadians earning about $140,000 or more – which had previously been the fourth and highest tax bracket – dropped by $4.6-billion in 2016, the first full year that the Liberal tax changes were in effect. Further, 30,340 fewer Canadians reported incomes in that range for 2016 compared with the year before. …The new top bracket with a 33-per-cent tax rate was predicted to raise about $3-billion a year in new revenue… Critics of the Liberal plan say the CRA’s 2016 numbers justify their concern that a new top tax bracket hurts Canadian efforts to boost competitiveness and attract top talent.

It’s quite possible, as noted in the article, that some of the foregone revenue might be the result of one-time changes, such as upper-income taxpayers shifting income from 2016 to 2015 (rich people do have considerable control over the timing, level, and composition of their income).

A report from Global News reviews an analysis about the degree to which revenues dropped for transitory reasons:

The Liberal government’s 2016 tax hike on Canada’s top one per cent not only failed to yield the promised billions, but resulted in a net revenue loss for government coffers… After adjusting for economic changes and one-time factors, the paper estimates, based on 2016 tax data, that the Liberals’ new tax bracket for top earners creates $1.2 billion in new revenue for the federal government but a $1.3 billion loss for provincial governments. …Finance Minister Bill Morneau’s office, however, has maintained that the revenue drop for 2016 was a one-off event. …But an analysis of the data that adjusts for the impact of the dividends maneuver and economic factors still shows that the tax hike would have fallen far short of the hype… Studies have shown that top earners are more likely than lower-income taxpayers to react to tax increases by reducing their taxable income. This may be because the wealthy have access to more sophisticated tax advice, are more easily able to shift assets to lower-tax jurisdictions or can afford to simply decide to work less given that they get to keep less of their money.

Much of the data in this story came from an analysis by the C.D. Howe Institute.

Here’s the key chart from that study, which disentangles the one-off changes and permanent changes caused by the higher tax rate. 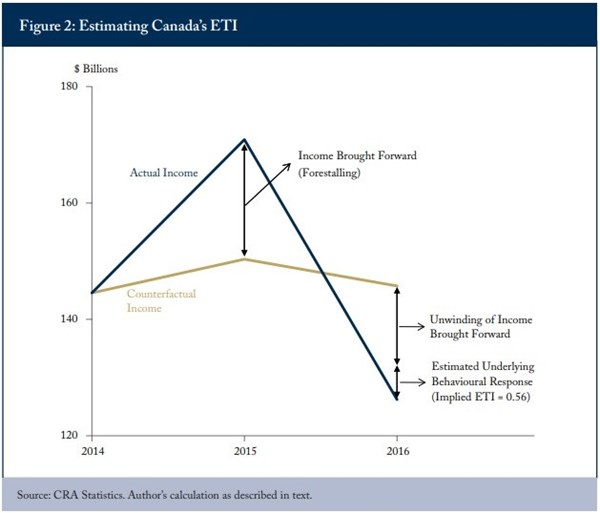 The bottom line is that the experts at the C.D. Howe Institute believe the central government will eventually collect more revenue from the higher tax rate, but:

In other words, Trudeau’s tax hike was a big mistake. The only tangible results are that the private sector is now smaller and the country is less competitive.

For what it’s worth, I view the lack of additional tax revenue as a silver lining to an otherwise dark cloud. Maybe, just maybe, this will put a damper on some of Trudeau’s irresponsible plans for more spending.