That's why even Colorado and Vermont rejected it.

In the Dirty Harry movies, one of Clint Eastwood’s famous lines is “Go ahead, make my day.”

I’m tempted to say the same thing when I read about politicians proposing economically destructive policies.

Indeed, I sometimes even relish the opportunity. I endorsed Francois Hollande back in 2012, for instance, because I was confident he would make the awful French tax system even worse, thus giving me lots of additional evidence against class-warfare policies.

Now we have another example. Politicians in California, unfazed by the disaster of Obamacare (or the nightmare of the British system), want to create a “single-payer” healthcare scheme for the Golden State.

This Would Be a Catastrophe

Here’s a description of the proposal from Sacramento Bee.

It would cost $400 billion to remake California’s health insurance marketplace and create a publicly funded universal health care system, according to a state financial analysis released Monday. California would have to find an additional $200 billion per year, including in new tax revenues,

to create a so-called “single-payer” system, the analysis by the Senate Appropriations Committee found …Steep projected costs have derailed efforts over the past two decades to establish such a health care system in California. The cost is higher than the $180 billion in proposed general fund and special fund spending for the budget year beginning July 1.

…Lara and Atkins say they are driven by the belief that health care is a human right and should be guaranteed to everyone, similar to public services like safe roads and clean drinking water. …Business groups, including the California Chamber of Commerce, have deemed the bill a “job-killer.” …“It will cost employers and taxpayers billions of dollars and result in significant loss of jobs in the state,” the Chamber of Commerce said in its opposition letter.

Yes, you read correctly. In one fell swoop, California politicians would more than double the fiscal burden of government. Without a doubt, the state would take over the bottom spot in fiscal rankings (it’s already close anyhow).

Part of me hopes they do it. The economic consequences would be so catastrophic that it would serve as a powerful warning about the downside of statism.

The Wall Street Journal opines that this is a crazy idea, and wonders if California Democrats are crazy enough to enact it.

…it’s instructive, if not surprising, that Golden State Democrats are responding to the failure of ObamaCare by embracing single-payer health care. This proves the truism that the liberal solution to every government failure is always more government.

…California Lieutenant Governor Gavin Newsom, the frontrunner to succeed Jerry Brown as Governor next year, is running on single-payer, which shows the idea is going mainstream. At the state Democratic convention last weekend, protesters shouted down speakers who dared to ask about paying for it. The state Senate Appropriations Committee passed a single-payer bill this week, and it has a fair chance of getting to Mr. Brown’s desk.

I semi-joked that California was committing slow-motion suicide when the top income tax rate was increased to 13.3 percent.

As the editorial implies, the state’s death will come much faster if this legislation is adopted.

A $200 billion tax hike would be equivalent to a 15% payroll tax, which would come on top of the current 15.3% federal payroll tax. …The report dryly concludes that “the state-wide economic impacts of such an overall tax increase on employment is beyond the scope of this analysis.”

California’s forecasting bureaucrats may not be willing to predict the economic fallout from this scheme, but it’s not beyond the scope of my analysis.

If this legislation is adopted, the migration of taxpayers out of California will accelerate, the costs will be higher than advertised, and I’ll have a powerful new example of why big government is a disaster.

If Single Payer Gets Enacted

Ed Morrissey, in a column for The Week, explains why this proposal is bad news. He starts by observing that other states have toyed with the idea and wisely backed away.

Vermont had to abandon its attempts to impose a single-payer health-care system when its greatest champion, Gov. Peter Shumlin, discovered that it would cost far more than he had anticipated. Similarly, last year Colorado voters resoundingly rejected ColoradoCare when a study discovered that even tripling taxes wouldn’t be enough to keep up with the costs.

The solutions for…fiscal meltdown in a single-payer system…all unpleasant. One option would be to cut benefits of the universal coverage, and hiking co-pays to provide disincentives for using health care. …The state could raise taxes for the health-care system as deficits increased, which would amount to ironic premium hikes from a system designed to be a response to premium hikes from insurers. Another option: Reduce the payments provided to doctors, clinics, and hospitals for their services, which would almost certainly drive providers to either reduce their access or leave the state for greener pastures.

By the way, I previously wrote about how Vermont’s leftists wisely backed off single-payer and explained that this was a great example of why federalism is a good idea.

Simply stated, even left-wing politicians understand that it’s easy to move across state lines to escape extortionary fiscal policy. And that puts pressure on them to be less greedy. 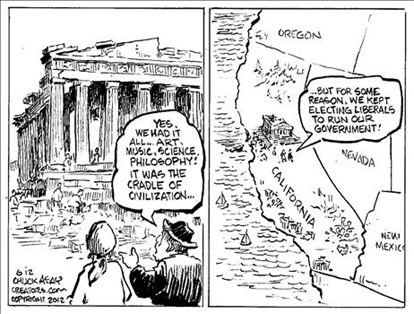 This is one of the main reasons I want to eliminate DC-based redistribution and let states be in charge of social welfare policy.

Using the same reasoning, I’ve also explained why it would be good news if California seceded. People tend to be a bit more rational when it’s more obvious that they’re voting to spend their own money.

Though maybe there’s no hope for California. Let’s close by noting that some Democrat politicians in the state want to compensate for the possible repeal of the federal death tax by imposing a huge state death tax.

In a column for Forbes, Robert Wood has some of the sordid details.

California…sure does like tax increases. …The latest is a move by the Golden State to tax estates, even if the feds do not. …A bill was introduced by state Sen. Scott Wiener (D-San Francisco), asking voters to keep the estate tax after all. …if the feds repeal it, and California enacts its own estate tax replacement, will all the billionaires remain, or will high California taxes spark an exodus? It isn’t a silly question.

Of course billionaires will leave the state. And so will many millionaires. Yes, the weather and scenery are nice, but at some point rich people will do a cost-benefit analysis and decide it’s time to move.

And lots of middle-class jobs will move as well. That’s the inevitable consequence of class-warfare policy. Politicians say they’re targeting the rich, but the rest of us are the ones who suffer.

The Golden State already is in trouble. If it becomes an American version of Greece or Venezuela, bad news will become horrible news and I’ll have lots of material for future columns.