Whatever the ultimate causes may be, the facts are clear that students, parents, and taxpayers have paid increasingly more for higher education, with dubious results.

Image by mamir_k94 from Pixabay

Elizabeth Warren, Bernie Sanders, and certain media outlets are blaming steep rises in college costs on reduced government funding for higher education. The reality is that inflation-adjusted government spending per college student has risen by about three times since the 1960s and is now at an all-time high. In spite of this, college graduation rates, academic time investment, and the learning of practical skills are all suffering.

The True Costs of College

Over the past several decades, college tuitions have ballooned, negatively impacting parents, students, and recent grads who are struggling to pay back student loans. The inflation-adjusted average sticker price for public college has doubled since 1980. For private colleges, it has nearly tripled: 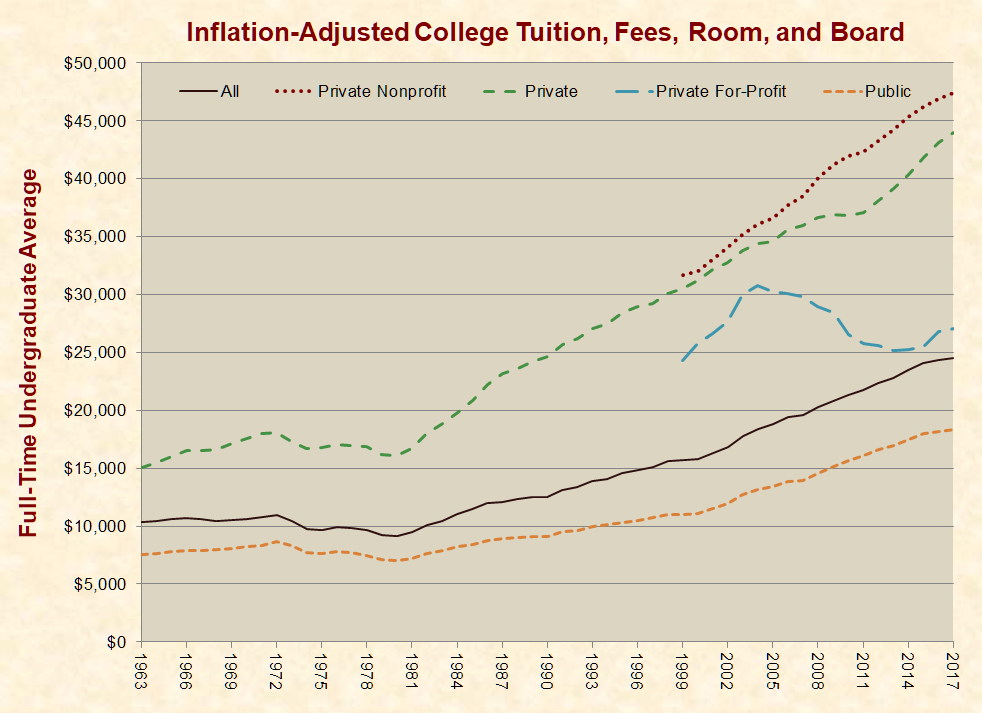 Many students pay less for college than published sticker prices because of discounts, scholarships, and financial aid. Thus, David Leonhardt of the New York Times argues that sticker prices exaggerate the cost of college. However, the truth is that society pays for all of these costs and more. Whatever students and parents don’t pay, taxpayers and donors do.

For in-state students at public two-year colleges, the difference is much larger. Their average annual sticker price is $3,243, while the average spending per student is $16,512—five times their sticker price.

The difference declines considerably at four-year private non-profit colleges, but the costs to society still surpass consumer prices. Their average sticker price is $43,139 per year, while the average spending per student is $58,794—36 percent higher than the sticker price.

The soaring costs of college are also evidenced by the fact that outstanding student loan debt is now larger than any other type of consumer debt except for mortgages.

The soaring costs of college are also evidenced by the fact that outstanding student loan debt is now larger than any other type of consumer debt except for mortgages. Further, the 90-day delinquency rate for student loans surpassed that of credit cards for the first time, and it is now 47 percent higher than any other major type of loan.

The burden of paying for higher education is becoming a major campaign issue, and Democrat contenders like Elizabeth Warren and Bernie Sanders are blaming the situation on reduced government funding. Media outlets like The Washington Post and the Associated Press are telling the same story. In the words of the AP, “Year after year, colleges say they have to raise tuition to offset state funding cuts. Students have shouldered the cost by taking out loans, pushing the country’s student debt to nearly $1.6 trillion this year.”

Like the AP, Warren, Sanders, and the Post focus on state funding, which declined after the Great Recession. However, they fail to mention that federal funding rose more than state funding declined. Looking at the big picture, data from the US Bureau of Economic Analysis shows that inflation-adjusted government spending per college student has risen by nearly three times over the past century and is currently greater than it has ever been: 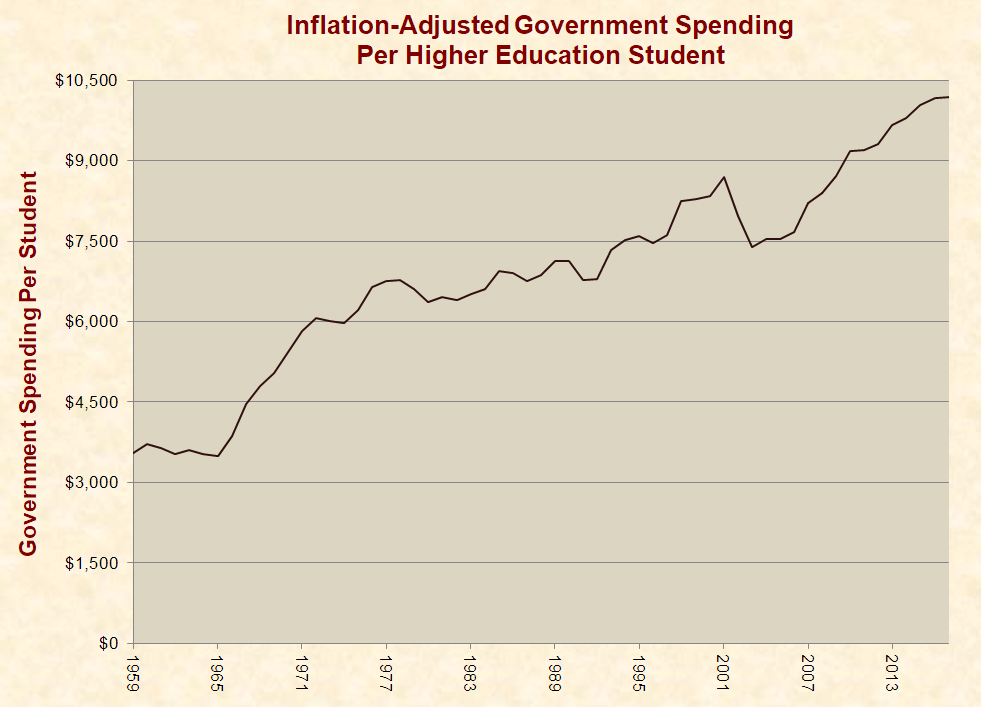 In 1959, the earliest year of available data, taxpayers contributed $3,550 per student. This climbed to $10,182 per student in 2017, the latest year of data. These figures reflect the inflation-adjusted averages for all higher education students, not just those who receive the money.

Also, the portion of recent high school graduates (aged 16–24) enrolled in college rose from 45 percent in 1960 to 67 percent in 2017. Hence, taxpayers are not only paying more per student, but they are also paying for more students.

Large portions of these students are not graduating, especially those who attend highly subsidized schools like community colleges. This lessens the societal benefits of investing in education. Among full-time, new college students who entered a two-year public college in 2014, 25 percent graduated from the same institution within 150 percent of the normal time required to do so.

Even among graduates of four-year colleges, many are not learning practical skills that increase their productivity, which is the main driver of living standards.

Perhaps most importantly, even among graduates of four-year colleges, many are not learning practical skills that increase their productivity, which is the main driver of living standards. In 2014, Professor Richard Arum of New York University and Assistant Professor Josipa Roksa of the University of Virginia published a study using the Collegiate Learning Assessment to measure the “critical thinking, complex reasoning, and writing skills” of 1,666 full-time students who entered four-year colleges in the fall of 2005 and graduated in the spring of 2009. The authors found that if the test “were rescaled to a one-hundred-point scale, approximately one-third of students would not improve more than one point over four years of college.”

Contrary to the Democrat/media narrative, students and parents aren’t paying more for college because government funding has declined. They are paying more because colleges have become more costly.

Along with these cost increases, academic time investment by full-time college students has fallen. During the school year, they are now spending about 50 percent more time on leisure activities and sports than on academics. As reported in a 2011 paper in the Review of Economics and Statistics:

Full-time students allocated 40 hours per week toward class and studying in 1961, whereas by 2003, they were investing about 27 hours per week. Declines were extremely broad based and are not easily accounted for by framing effects, work or major choices, or compositional changes in students or schools. We conclude that there have been substantial changes over time in the quantity or manner of human capital production on college campuses.

Notably, these institutions have become dominated by Democrats and progressives. A paper published in 2018 by the journal Academic Questions found that among 8,688 full-time, PhD-holding professors at 51 of the 66 top-ranked liberal arts colleges, the ratio of registered Democrats to registered Republicans is 10.4 to 1. Among the college academic departments examined, 78 percent had “either zero Republicans, or so few as to make no difference.”

Determining the root causes of increasing college costs can be difficult because association does not prove causation. Beyond the actions of people who manage higher education, other variables are almost certainly at play.

One of these factors may be increased government spending on colleges, which creates a cost disconnect with consumers. Normally, people will not buy products or services unless they receive adequate value for their money. However, when taxpayers pick up part or all of the tab, this can create an effective monopoly because the costs don’t fall directly on consumers. Per the academic textbook Antitrust Law:

Monopoly pricing confronts the consumer with false alternatives: the product that he chooses because it seems cheaper actually requires more of society’s scarce resources to produce. Under monopoly, consumer demands are satisfied at a higher cost than necessary.

Along similar lines, Deborah J. Lucas, director of the MIT Center for Finance and Policy and former chief economist of the Congressional Budget Office explains:

[S]ome observers point to the easy and low-cost access to federal student loans as fueling the steep rise in the cost of higher education in the last decade. Easier access to credit markets is not always advantageous to program participants. Unsophisticated borrowers, such as some college students and first-time homebuyers, may not be fully aware of the costs and risks associated with accumulating high debt loans.

Whatever the ultimate causes may be, the facts are clear that students, parents, and taxpayers have paid increasingly more for higher education, with dubious results. Yet, Elizabeth Warren, Bernie Sanders, and various media outlets are misleading the public about these issues while calling for taxpayers to provide even more money.