Barely Half of Student Loans Are Being Repaid

Defaults Are Up, Again

The US Department of Education's new data on the status of outstanding student loans show that outright defaults are up. However, their press release — and much of the accompanying media coverage — instead played up a decline in loan delinquencies. The increase in defaults is worrisome and needs to be addressed by Congress.

The total amount of outstanding direct student loans stood at $855 billion at the beginning of the first quarter of 2016, distributed among over 30 million recipients. (This total does not include loans still outstanding under the now-discontinued FFEL program, which guaranteed private-sector student loans.) The total direct loan amount outstanding is up roughly 15 percent over a year ago, doubtlessly the result of relentless tuition increases.

Excluding student loans owed by borrowers currently in school or in their six-month grace period, 46 percent of student loans are not currently being repaid. Ten percent of student loans are delinquent, meaning the borrower has missed payments for thirty days or more. Another 13 percent are in deferment, which means payments have been postponed for various reasons. Another 14 percent are in forbearance, meaning the borrower has encountered economic hardship and had their payments suspended or reduced.

The remaining 8 percent are in default.

Fifty-four percent of loans are currently in repayment, up slightly from 51 percent at the same point in 2015. 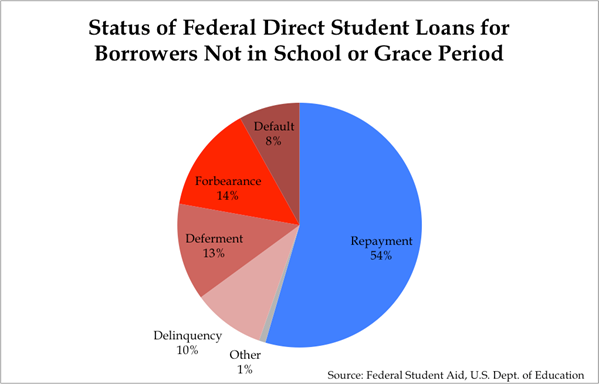 Now, these statistics do not mean that taxpayers will need to pick up the tab for 46 percent of the outstanding student loan balance, but they do raise a red flag that taxpayers could be on the hook for a lot of money if these loans are not repaid in full. Moreover, high delinquency and default rates will hurt the ability of students to gain access to credit in the future, slowing the economy.

Unfortunately, the trend seems to be moving in the wrong direction. While delinquency rates dropped, overall loan nonperformance increased. Most notably, student loans in default (defined here as loans more than 360 days delinquent) increased 31 percent in the past year, to $56 billion. This far outpaced the 20 percent increase in the outstanding balance for all borrowers not in school or a grace period. 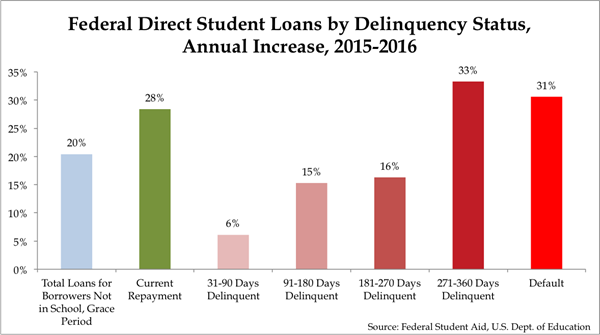 Extreme nonperformance of student loans is growing troublingly common. A strong predictor of student loan delinquency (or default) is whether the student has actually graduated from college, since students who drop out face limited employment prospects. Graduation rates, at 60 percent, have plenty of room for improvement.

There are some other notable data points from the Education Department release. Parent PLUS loans, an effectively unlimited stream of funds for taxpayers to finance undergraduate degrees, are up 9 percent to $71 billion, well outpacing the 6 percent increase in regular (Stafford) loans. Recipients of Parent PLUS loans are up 6 percent to three and a half million individuals — continuing a worrying trend that will likely result in ever-higher tuition inflation. I have previously argued that the PLUS program should be eliminated before it gets too large.

Total taxpayer exposure, including government guarantees of private loans, is up to $1.2 trillion. This is larger than outstanding auto loans ($1.1 trillion) and credit card debt ($0.7 trillion). The student loan balance is also growing faster than most other types of debt: credit card debt has grown 4.3 percent over the previous year, while housing debt has grown just 0.1 percent. Of the major debt types, only auto debt grew quicker than student loans, at a rate of 12 percent.

As time goes on, Congress will find it increasingly difficult to ignore student loans. Eliminating (or at least capping) the PLUS loan program would be a good start for reform. However, eventually more fundamental changes, including partial privatization, will be necessary. The longer Congress waits to act, the more difficult the transition will be.