Of course, this concept isn’t new. It’s been around for a long time.

One of the many frustrations of working in Washington is that politicians, when dealing with a problem created by government intervention, routinely propose that the solution is to give even more power to government. And since they are either unwilling or unable to connect the dots, they don’t care that their “solutions” will make matters worse. I’ve referred to this unfortunate pattern as “Mitchell’s Law.” 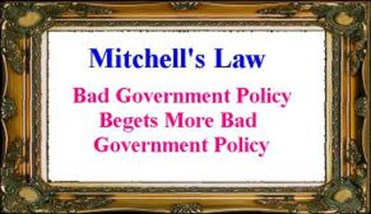 Redistribution programs that were adopted as part of the so-called War on Poverty, for instance, have undermined poverty reduction. Yet politicians look at this bad result and assume the answer is even more spending to trap more people in dependency.

Politicians declared a “War on Drugs” for the ostensible purpose of eradicating use. When that impractical goal wasn’t achieved, they exacerbated the harm to civil liberties with onerous money laundering laws and abusive asset forfeiture laws.

For the alleged purpose of making college more affordable, politicians created programs to subsidize tuition. This predictably led to higher prices and inefficiency, which then results in lawmakers urging additional subsidies that will further push up costs.

Other people also have been publicizing this concept. I especially like what Chuck Blahous of the Mercatus Center recently wrote about the 5-step Washington tradition of “doubling down” on policy mistakes. The final step could be called the lather-rinse-repeat cycle of government failure.

He starts with the tax code’s healthcare exclusion.

With the best of intentions the federal government has long exempted worker compensation in the form of health benefits from income taxation.  There is wide consensus among economists that the results of this policy have been highly deleterious.  As I have written previously, this tax exclusion “depresses wages, it drives up health spending, it’s regressive, and it makes it harder for people with enduring health conditions to change jobs or enter the individual insurance market.”  Lawmakers have reacted not by scaling back the flawed policy that fuels these problems, but rather by trying to shield Americans from the resulting health care cost increases.

He then points out that Medicare, Medicaid, and other spending programs have a similar impact.

The federal government has enacted programs such as Medicare and Medicaid to protect vulnerable seniors and poor Americans from ruinous health care costs.  …it is firmly established that creating these programs pushed up national health spending, driving health costs higher for Americans as a whole.  Consumer displeasure over these health cost increases subsequently became a rationale for still more government health spending, rather than reducing government’s contribution to the problem.  Examples of this doubling down include the health exchange subsidies established under the Affordable Care Act (ACA), as well as its further expansion of Medicaid.

Chuck also shows how government involvement has created the same unhealthy dynamic in other areas, writing about college costs, Social Security, and Obamacare.

The moral of the story, as displayed by this poster, is that more government is the problem instead of the solution. Which is something Bastiat warned us about back in the 1800s.