Are Investors Riding a Credit-Fueled Boom?

All that booms must bust.

Following the presidential election outcome on 8 November 2016, US interest rates have gone up quite a bit. The 10-year US Treasury bond yield currently stands at around 2.4 percent, the 2-year yield at around 1.1 percent. 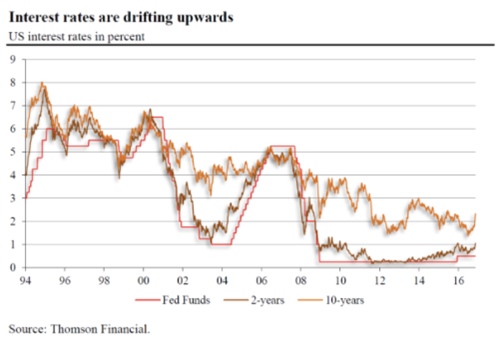 Also, an edging up of interest rates increases firms’ funding costs, especially for those companies that have leveled up their balance sheets. It reduces their free cash flows, translating into lower stock prices.

At the same time, however, rising interest rates could be an early signal that economic activity is about to improve. The hope for more investment and higher economic growth spur investors’ profit expectations, and this argues for higher stock prices.

In other words: it isn’t that straightforward to pin down the net-effect rising interest rates exert on stock prices. There is, however, something in the interest rate market that appears to be particularly informative for investors. And this is the shape of the yield curve.

The chart below shows the S&P 500 stock market index and the spread between 10-year and 2-year US government bond yields. Most of the time the yield curve was positive in the period under review as long-term yields exceeded short-term rates. 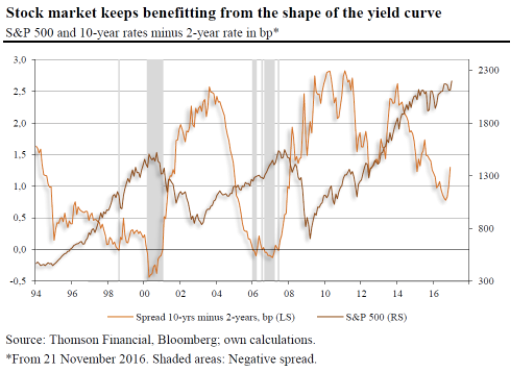 As short-term rates increased long-term rates, banks got into trouble. They typically lend long-term and finance their lending activity with shorter maturities. If and when the yield curve is positive, borrowing is a profitable business.

If, however, the yield curve starts flattening out, or even becomes negative, lending out money becomes less profitable for banks and they become much more hesitant to refinance maturing loans and increase their loan book.

The yield curve is not the only thing determining the direction of the market, but it seems to be an important element in the fractional reserve banking regime.As the inflow of bank credit dried up, the stock market nosedived. Investors, and rightly so, feared that stock valuations were heading south. They ran for the exit, selling off their stocks. The party was over.

Even though the Fed rushed in to lower interest rates as early as September 2007, the credit boom had turned into a bust, and the meltdown was already underway. What followed was the so-called financial and economic crisis of 2008/2009.

This is not to say that the shape of the yield curve would be the only important factor in determining the direction of the stock market. It seems to be, however, a fairly important element in the working of today’s fractional reserve banking regime.

Such an artificial increase in the credit supply pushes market interest rates below their “natural level.” This, in turn, sets into motion an artificial boom: credit financed consumption and investment spending takes off.

The newly injected money drives up prices. In the last decades in particular asset prices, including stock prices, have been driven up by the relentless increase in credit and money issued by banks. 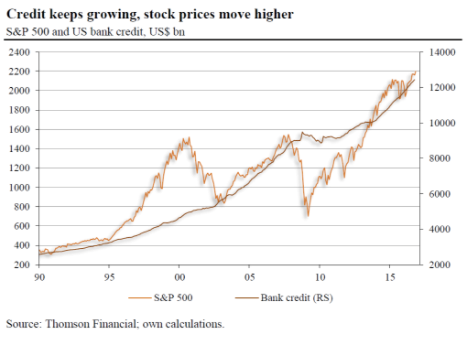 However, the boom must eventually end in a bust. This is what the economists of the Austrian School of Economics have, on sound economic reasoning, been pointing out. For instance, Murray N. Rothbard (1926 – 1996) noted:

Like the repeated doping of a horse, the boom is kept on its way and ahead of its inevitable comeuppance by repeated and accelerating doses of the stimulant of bank credit. It is only when bank credit expansion must finally stop or sharply slow down, either because the banks are getting shaky or because the public is getting restive at the continuing inflation, that retribution finally catches up with the boom. As soon as credit expansion stops, the piper must be paid, and the inevitable readjustments must liquidate the unsound over-investments of the boom and redirect the economy more toward consumer goods production. And, of course, the longer the boom is kept going, the greater the malinvestments that must be liquidated, and the more harrowing the readjustments that must be made.

In an effort to prevent the bust, central banks try to keep banks churning out ever more credit and money. To this effect, they seek to provide banks with the most favorable funding conditions possible. Pushing down interest rates is one thing.

Another thing is keeping the yield curve in positive shape by holding short-term rates down – this certainly spurs banks willingness and capabilities to engage in additional credit creation through which the boom gets going.

While central banks’ inflationary policies cannot go on indefinitely, they can actually continue for quite a while. In fact, an inflationary policy may last much longer than what one may consider economically and ethically desirable.

There are good reasons to be invested in stocks long-term, no doubt about that. But if the investor wants an early warning against an approaching bust, he or she should pay very close attention to credit market developments, and the development of yield curve in particular.