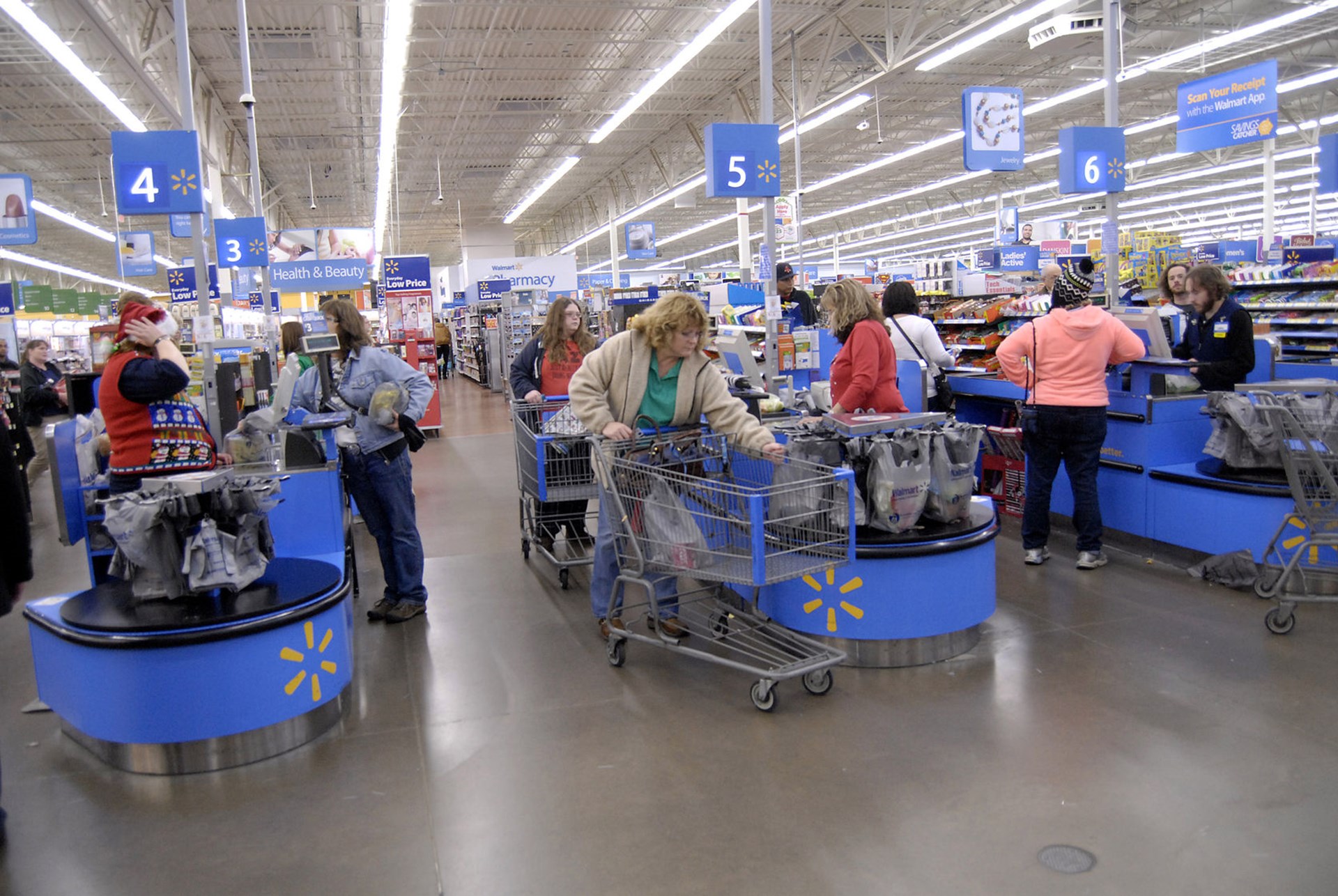 On a recent segment of his popular Fox News program, conservative pundit Tucker Carlson took aim at elite billionaires Jeff Bezos, the Walton family, and Travis Kalanick, arguing that their giant corporations rip off taxpayers. Carlson claimed that Amazon, Walmart, and Uber underpay their workers—who must turn to government programs just to survive—and use regulations to stifle their competitors.

Although I agree that some corporations (such as Amazon) benefit from cozying up to the government, the basic economic logic in this popular critique is backward: The food stamp program tends to raise wage rates by giving workers more bargaining power. Worse, Bernie Sanders’s proposal to impose a 100 percent tax on large employers for every dollar their employees receive in government assistance would directly hurt these very same workers by punishing the companies that hire them.

To see why the critics misunderstand how labor markets work, let’s use an example based on actual numbers for fiscal year 2015 from this sympathetic study of SNAP (Supplemental Nutrition Assistance Program). Suppose a working mother supporting two kids earns $1,650 a month, which was just about the official poverty line. Her household claims the standard deduction and earned income credit and has $1,110 in monthly shelter costs. Such a family typically might receive about $300 total in monthly SNAP benefits, and these would phase out if the household earned more income.

Now, the way critics from Bernie Sanders to Tucker Carlson interpret this scenario, if only the breadwinner in this household got a raise from her employer—say, $300 a month—the taxpayers wouldn’t need to chip in to help feed her kids. This is the commonsense reasoning by which Amazon and Walmart are allegedly unloading some of their labor costs on taxpayers and why Carlson says Jeff Bezos owes you a “thank you.”

But hold on a second. In this example, the woman’s landlord could also help this struggling mother by reducing her rent $300 per month. Does the landlord owe taxpayers gratitude, as well?

Actually, the one group of merchants who literally benefit financially from the food stamp program are the grocers. Your tax dollars directly fund payments to food vendors, whereas Tucker Carlson’s argument about Amazon concerns an indirect mechanism by (allegedly) suppressing wages. Think of it this way: If grocery stores sold food at lower prices, it would be easier for struggling households to make ends meet. So rather than blaming our single mother’s employer for paying too little, why don’t we blame her local grocery store for charging too much?

The obvious answer, of course, is that the grocery business is competitive and has small profit margins. If a grocery store were expected to hand over the same amount of food each month to our household while charging $300 less, it would lose money. Competition among grocery stores already ensures that each store isn’t jacking up prices (above their own cost) for our hypothetical breadwinner simply because she’s now armed with food stamps.

Yet similar logic applies to the labor market. Amazon and other large corporations may indeed be stifling competitors through various measures, but their workers are still free to quit whenever they want. In our example, the mother earned $1,650 per month and received $300 in food stamps. The way Bernie Sanders thinks about this situation, her employer should be forced to pay her at least $1,950 a month so the taxpayers can be let off the hook. But if this woman’s productivity really delivered $1,950 a month to her employer, she’d be generating a $3,600 ($300 x12) per year surplus for her employer. And according to critics, this situation describes millions of Amazon and Walmart workers across the country.

If this is the case, here’s my simple question: Why doesn’t some rival company offer these workers slightly higher pay to bid them away from their current employers?

If this is the case, here’s my simple question: Why doesn’t some rival company offer these workers slightly higher pay to bid them away from their current employers? After all, there are ostensibly billions of dollars in pure arbitrage profit waiting to be seized since it is so “obvious” that these millions of workers are being grossly underpaid.

No, the logic here is all wrong. Just like our grocery store, so too the employer: Competition from rival employers ensures that workers can’t (in the long run) be paid far below what they generate in revenue for their bosses. Therefore, to insist that these employers suddenly increase their employees’ pay—or following Sanders’s proposal, pay a dollar-for-dollar tax according to how much assistance their employees receive—would make these companies lose money on such workers. Eventually, if a company pays a worker more than he boosts revenue, that worker will be let go.

So far I’ve argued that no individual employer (or grocery store, for that matter) makes abnormal profits due to SNAP because competition whittles down the advantages. However, it’s still possible that in the aggregate, a large federal subsidy program—last year SNAP and other food assistance cost taxpayers about $70 billion—could affect the general level of wages.

However, even if we account for this subtlety, the argument goes the wrong way. If anything, federal assistance to low-income households increases the hourly wage rate. This is because the help from taxpayers gives workers more bargaining power: They can better afford to walk away from an awful job knowing that SNAP and other programs will help fill the gap if their income suddenly collapses. That means the supply of labor (for the types of jobs we are considering) shrinks, which tends to drive up its price, the hourly wage rate.

I can make my point by reference to another idea popular among many left-wing critics of capitalism. Proponents of a “Universal Basic Income” (UBI) predict that if the government bumped up the minimum monthly support payment, Americans would quit working in fast food restaurants and other dreary places because they would be freed from the necessity of a mere paycheck just to survive. But if that’s right, how can SNAP cause workers to face worse job conditions? Pushing the Carlson/Sanders logic to its extreme, if our mother got a UBI check for $1,950 per month, she would still work at her old job, but now she’d do it for $0 in wages since her employer could completely unload its expense onto the taxpayer. But obviously that’s not right—our mother would simply quit the job if she got a UBI check and her employer tried slashing her wages in response.

Part of the confusion on this complex issue stems from the fact that SNAP and other means-tested programs (like subsidies for health insurance under Obamacare) phase out as a household earns higher wages. This may perversely confront low-income workers with a very high effective marginal income tax rate, making it even more difficult to climb out of poverty. This incentive structure might lead many individuals to only work part-time so their total income stays below the threshold in order to continue receiving full taxpayer support.

And as I’ve tried to show with several different approaches, if anything, SNAP and other programs reduce the total supply of labor offered and so increase the hourly wage rate Amazon must pay low-income workers.

Yet even to the extent this is true, it doesn’t reduce the payroll expense for corporations per hour worked. Whether an Amazon fulfillment center hires one worker at 40 hours per week versus four workers at ten hours per week, the wage bill is the same, assuming the same hourly wage rate in both scenarios. And as I’ve tried to show with several different approaches, if anything, SNAP and other programs reduce the total supply of labor offered and so increase the hourly wage rate Amazon must pay low-income workers.

Amazon, Walmart, and other corporate behemoths often use their wealth to get special favors from the government. However, they should be acquitted of the specific charge that they offload their labor costs to taxpayers through SNAP and other welfare programs. A generous social safety net gives workers more options so they can better afford to care for a relative, take an unpaid internship, or go back to school. To attract workers to unpleasant conditions, these large companies must therefore pay higher wages than they otherwise would.

Finally, Sanders’s proposal would hurt the very workers he wants to help. When Sanders wants large corporations to emit less carbon, he proposes a stiff tax on their carbon emissions. By the same token, if Sanders gets his way and imposes a large tax on corporations that hire SNAP recipients, the obvious result will be mass layoffs of these employees.

This article was reprinted with permission from the Independent Institute.