Americans Agree Violent Crime Should Be Police Priority – Not Drugs

Despite some minor differences between groups, people generally agree that current police priorities are out of order.

Although Americans are divided in their perceptions of how police do their jobs, majorities across demographic and partisan groups agree on what law enforcement’s top priorities ought to be.

A newly released Cato Institute/YouGov survey of 2,000 Americans finds that when people are asked to select their top three priorities for the police they choose the following: 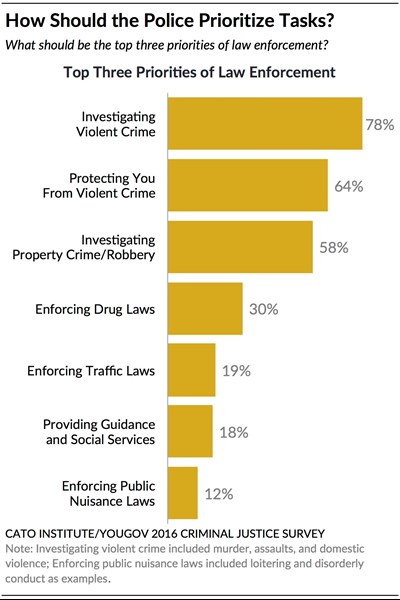 Notably, only 30% think police should make enforcing drug laws a top three priority. Some may find these results surprising, given that police made more arrests for drug abuse violations (1.6 million) than they did for violent crimes (498,666) in 2014. The estimated number of violent crimes committed that year was 1.2 million.

Nineteen percent (19%) say police should make enforcing traffic laws a top priority. In other words, Americans de-prioritize the task leading to the most common interaction individuals have with the police – receiving a traffic ticket.

Another 18% think police should prioritize going beyond traditional law enforcement responsibilities by “providing guidance and social services to troubled young adults.” And another 12% say police enforcing public nuisance laws is most important.

Black, white, Hispanic, Democrat, and Republican Americans all prioritize the same top three tasks for law enforcement. However, groups differ in their intensity of support. African Americans and Hispanics (45%) and Democrats (51%) are less likely than white Americans (63%) and Republicans (63%) to prioritize the police investigating property crime and robbery. (Although this difference largely dissipates among individuals above the median income.) African Americans, Latinos, and Democrats (27%) are about twice as likely as whites (15%) and three times as likely as Republicans (9%) to say the police should prioritize “providing guidance and social services to troubled young adults.”

Despite these modest differences, Americans across partisanship and demographics agree that the police should prioritize fighting violent and property crime and protecting people from being victims of violence.

The Cato Institute/YouGov national survey of 2,000 adults was conducted June 6–22, 2016 using a sample drawn from YouGov’s online panel, which is designed to be representative of the U.S. population. YouGov uses a method called sample matching, and restrictions are put in place to ensure that only the people selected and contacted by YouGov are allowed to participate. The margin of sampling error for all respondents is +/-3.19 percentage points. The full report can be found here, topline results can be found here, and full methodological details can be found here.

Emily Ekins is a research fellow at the Cato Institute.