Government officials in Sweden announced this week that the government expects to maintain its mild restrictions on gatherings “for at least another year” to mitigate the spread of COVID-19.

Unlike most other European countries and nations around the world, Sweden declined to initiate a nationwide lockdown or mask mandates, opting instead for a policy that restricted large gatherings and relied on social responsibility to slow transmission of the virus.

For months, Sweden was criticized for its decision to forego an economic lockdown.

“Sweden becomes an example of how not to handle COVID-19,” CBS declared in its headline in a July article.

“They are leading us to catastrophe,” The Guardian warned in March.

Dozens of similar examples can be found. With every passing week, however, it’s becoming more clear that Sweden got the virus right. For starters, Swedish officials point out that even if lockdowns did save lives, they cannot long be endured.

"The measures that are being taken in Europe are not sustainable, we're trying to find a level that is steady and that keeps the spread down. We can't get rid of it, but we can keep it down at a reasonable level," Johan Carlson, the director general of Sweden's public health agency, said in an interview with public broadcaster SVT on Sunday.

It’s also worth pointing out that Sweden has avoided some of the economic carnage of its European neighbours experienced by implementing harsh lockdowns. In August, the BBC pointed out that Sweden’s economy experienced much less damage during the pandemic.

Both of these facts help explain why Sweden has not witnessed the widespread social unrest other nations have seen.

"A certain fatigue is setting in, this has been going on for a number of months,” Carlson admitted. “But we are not seeing anger or aggression, we're not seeing the same reactions as in Europe.”

This should come as no surprise. Life in Sweden is still relatively normal. People never stopped going to restaurants and bars, pools or parks. Schools and places of business remained open. Hence, the mass protests, violence, and spikes of mental health deterioration, drug overddoses, and suicide nations around the world have witnessed in 2020 have been notably absent in Sweden.

Perhaps most importantly, Sweden’s “lighter touch” seems to have tamed COVID-19. While many European countries that implemented lockdowns are witnessing a resurgence of the virus, Sweden’s cases and deaths remain a stark contrast to other European nations.

Not only no mask mandate; almost no mask wearing in Sweden. Never closed. God bless this free country. pic.twitter.com/6ufoUPXIgW

It’s true there was concern around a slight uptick in cases that began in mid-September, but the increase is well below other European nations, which has resulted in fewer COVID-19 related deaths.

Yinon Weiss, a founder of RallyPoint and a Harvard Business School grad, has shown, Sweden’s current daily death rate is exponentially lower—25x, 10x, 7x—than many of its European counterparts that initiated strict lockdowns, such as Spain, the United Kingdom, and France.

This must be getting awkward for Spain, France, and the UK locking down again. Sweden is enjoying open schools, open businesses, and no masks.

Throughout the pandemic, many have claimed Sweden can’t be compared to these larger nations, since they have higher population density. The link between COVID-19 and urban density is weak at best, but even if you account for population density data show that Sweden’s capital of Stockholm has outperformed American cities that locked down like Boston, Philadelphia, and Chicago. (And of course New York.)

"Compared to cities of similar density, the Swedes still outperform with no lockdowns or masks.

The truth will not be hidden forever. Get on the right side of history." - @yinonw pic.twitter.com/gIS0EUAdE4

Even the Nordic countries with low death rates that Sweden often is unfavorably compared to are now seeing a sharp rise in cases (though death in all Nordic countries thankfully remains low).

A look at #Covid_19 cases in Nordic countries.

Critics of Sweden’s policy will point out that Sweden’s COVID-19 death rate is still higher than its Nordic neighbors—the result of a failure to adequately protect its eldercare homes—but the goal was never to have the lowest coronavirus death rate in Europe. It was to limit the spread of the virus and prevent hospital systems from being overwhelmed.

Despite predictions that its laissez-faire policy would result in mass infection and 96,000 deaths, Sweden succeeded and its per capita death toll today remains well below many of its European neighbors.

The last three months have been particularly striking, Weiss points out. 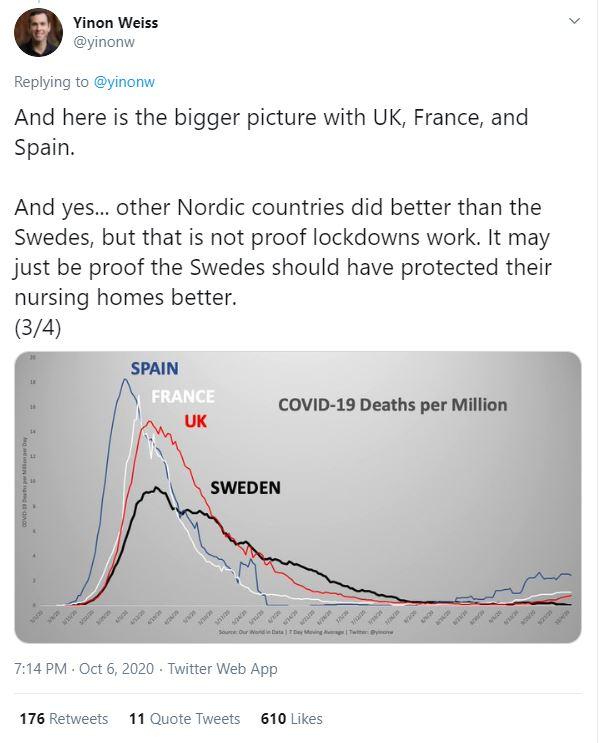 As John Tierney recently explained in City Journal, the best that can be said of stay-at-home orders is that they may have made sense before we had solid data and little clue about the type of virus we were dealing with. We know better now. There is no correlation between lockdown stringency and COVID-19 deaths, while their harms are induspitable.

This is why thousands of medical practitioners and public health scientists have signed a new declaration—the Great Barrington Declaration—expressing grave concerns over the adverse effects of lockdowns and calling for a more targeted approach.

In June, following publication of an NPR report that showed COVID-19 is not as dangerous as first believed, I suggested lockdowns could prove to be the biggest expert “fail” since the Iraq War.